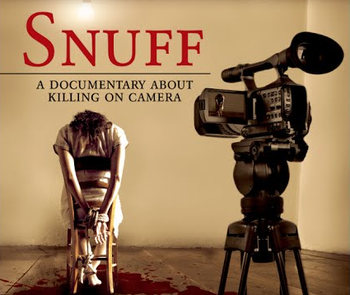 "They're just this side of snuff films, and friends, that's what's next because that's all that's left."
— Wes Mandel, Studio 60 on the Sunset Strip
Advertisement:

In our culture, violence is popular. So is sex. When people want to put forth a message about the values of our current society, they imagine what it would be like if both these valued qualities were blended and taken to the point where it's clear that anyone who appreciates the work has something very wrong with them, indeed.

Behold: the snuff film, a film where a person's death, the gorier the better, is captured on celluloid (or digital data in these internet-connected times) for someone else's...prurient interest. The snuff film has captured American imagination since the days of the Manson Family; in the aftermath of the cult's killings, the author of a true crime book on the Family put forth the rumor that they had videotaped their killings, inadvertently creating the term "snuff film." It wasn't true, but when American producers brought the Argentinian horror stinker Slaughter (based loosely on the Mansons) over to America they retitled the movie Snuff, tacked on a new and gorier ending, and launched a viral campaign that someone had actually been murdered on film as part of the movie.

What makes a snuff film is often up for debate. Whether it just captures a death on film (like the tapes put forth by terrorists that show people getting their heads cut off), is released for a commercial motive (like the Traces of Death franchise), or has to include sex and death is up in the air. This is mainly because there's no such thing as a "true" snuff film — according to the FBI, no such thing has ever been made. To clarify this point, the FBI defines a snuff film as depicting a murder that was committed for the primary purpose of being filmed and commercially distributed. While films of actual murders do exist, the FBI doesn't consider them snuff films because they either have a different motive (e.g. films of executions by terrorists which were distributed to sow fear rather than make money) or were not intended for distribution (e.g. a murderer makes a tape of his crimes for personal use and it leaks out after his capture). Then again, as long as creators have a message to make about sex and violence, the snuff film will exist as a model for what happens when things go too, too far.

To reiterate, snuff films exist in the realm of myth and legend. While many petty criminals have been known to film their own crimes, none have been so foolish as to film a crime for which they could be executed only for the purpose to film and distribute it (save for a possible exception), and no such film has ever been commercially distributed.

note Note that this article hasn't been updated since April 2021.

Snuff Films that depict this stuff happening to animals rather than humans are called Crush Films, because the animal is typically shown being crushed to death.

When a filmed death is an accident as opposed to a murder, see Fatal Method Acting.