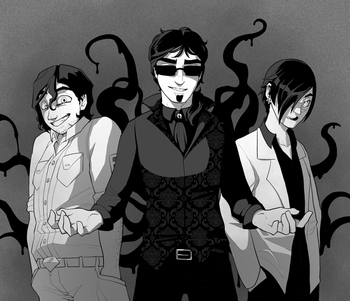 (from left to right) Strade, Rire and Sano
Advertisement:

A lonely college student wakes up after a night of hard drinking, and immediately decides to head to another bar to drown their sorrows, and maybe find someone to hook up with. Unfortunately for them, tonight is not their lucky night as depending on which bar they go to, they run across either a deranged scientist, a vicious serial killer, or a literal demon. From there, things escalate pretty quickly, and the protagonist soon finds themselves at the mercy of these lovely gentlemen, all of whom are more interested in vicious torture than any kind of romance.

Boyfriend to Death is an adult visual novel with a heavy emphasis on blood and gore. Unlike many visual novels, the aim of the game isn't to successfully seduce your guy of choice, it's to try and survive the things he'll do to you. Naturally, the game is loaded to the brim with Nightmare Fuel, bloody torture, and a heaping helping of violent insanity with almost all the endings culminating in the protagonist's agonizing death.

This game is not for the faint of heart.

Boyfriend to Death was released on June 3rd, 2016. PC and Mac versions can be downloaded and played for free at its official website

A sequel was released

A Spiritual Successor titled Till Death Do Us Part was released on October 3rd, 2017.

A fourth game titled Dollmaker is currently in development.

These visual novels contain examples of:

Till Death Do Us Part contains examples of:

Just say 'no' to drugs, kids. (Footage by Lionel Orlando)

Just say 'no' to drugs, kids. (Footage by Lionel Orlando)