Visual Novel / But I love you.

So come play with us. 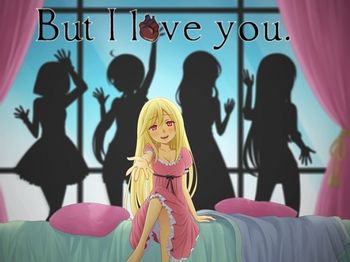 But I love you is an upcoming (possibly abandoned - see below) Visual Novel-style game developed by independent gaming company Novella Gaming. Greenlit by Steam Greenlight, then crowdfunded through Kickstarter; over a 45 day period, the developers raised $43,682 for development purposes. However, the last developer communication on Kickstarter was May of 2016, making it a possible case of Vaporware.

The game centres around the currently-nameless player character, a young man or woman currently going travelling to escape from a stressful home life, who experiences a car breakdown and arrives in a mysterious town called Keresberg. Once there, s/he begins to explore, meeting several cute girls who all seem, albeit to varying degrees depending on playstyle, friendly, helpful and affectionate. Early on, the game takes the form of a Dating Sim, allowing the player to spend time scoring with the ladies they’re interested in, each girl providing a different niche to fill. So far 5 romanceable characters have been confirmed:

However, before long the girls begin to get clingy, wanting the player to stay in the town with them — probably just one of them, but who knows? — forever; alarm bells begin to go off in the player’s head, telling him/her that there’s something very wrong with the girls — with the entire town, actually — and that they have likely stumbled into a very dangerous situation. Where they go from there — try to escape or stick around and keep courting — is all down to the player. If they do decide to take their chances and try to fight their way out, the gameplay shifts towards puzzles and and the overall tone of the game towards Survival Horror.

At this juncture, the game is still in development. As more information becomes available, the page will be updated. An official demo for the game was released on January 17th 2016 and can be found here

But I love you. provides examples of the following tropes:

Alternative Title(s): But I Love You