Series / Britain's Got the Pop Factor 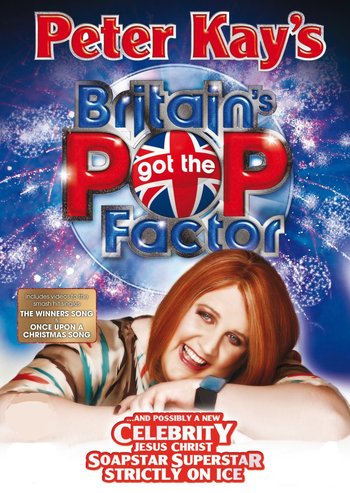 Peter Kay's Britain's Got the Pop Factor ... and Possibly a New Celebrity Jesus Christ Soapstar Superstar Strictly on Ice (or Britain's Got the Pop Factor for short) is an Affectionate Parody of TV talent shows, mainly influenced is The X Factor. It was broadcasted as a two-part one-off special on Channel 4 on 12 October 2008, and is notable for being Kay's first Channel 4 production in four years.

The special is a mock talent show grand finale, using recaps to explain the finalists' journeys. The production is very accurate; three of the judges from Pop Idol appear as themselves. Channel 4 were highly impressed by the ratings the special drew and promptly asked Kay to produce another one; it was followed that December with Geraldine: The Winner's Story.