You Won't Feel a Thing! 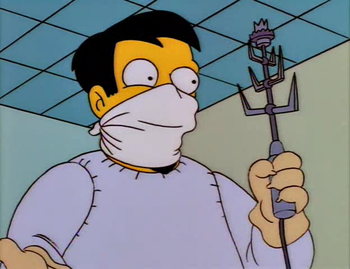 "...until I jam this down your throat!"
"Happiness is your dentist telling you it won't hurt and then having him catch his hand in the drill."
— Johnny Carson
Advertisement:

Stock Phrase uttered by a character who is about to do something potentially nasty to someone. They tell their victim that what they are about to do won't hurt at all. This often turns out to be a blatant lie.

This is often done by doctors or friends of the patient who genuinely mean well, and are just trying to help them. However, it can also be used as a sarcastic Pre-Mortem/Pre-Asskicking One-Liner by someone who is about to inflict a lot of deliberate pain on their victim. Or to imply they'll die too quickly to feel anything.

Another common variant is "This may hurt a little", or alternately, "You might feel a slight tingling sensation". This variation tends to be popular with Mad Scientists. A particularly psychopathic or dickish character may instead say, "I won't feel a thing." Yet another variant would be the doctor or dentist saying "This is going to hurt me more than it will hurt you."

Definitely Truth in Television, as anyone knows who has been to the dentist note There even is an expression in French, "to lie like a teethripper", presumably based on it , although it is increasingly averted as anesthesia gets better and starts to get used more widely. This is also a commonly-used phrase when children who are Afraid of Needles are involved.

There, that wasn't so bad, was it?

As Q prepares to inject Bond with a Tracking Device...

As Q prepares to inject Bond with a Tracking Device...