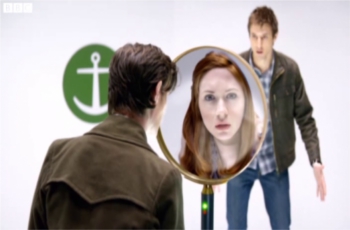 Amy's not exactly in the same place right now...
"I don't care that you grew old. I care that we didn't grow old together."
— Rory Williams
Advertisement:

The one where Amy dies. And gets better.
That's right- it's not Rory this time. It's the other spouse.

Alternatively, the one where Amy takes The Slow Path all because of one wrong button push. And is pissed.

The Doctor lands the TARDIS, telling Amy and Rory that they've arrived at Apalapucia, a beautiful resort planet — but on opening the door, they find themselves in a clinically white room. There's no spires or anything, just a single door in front of them. Amy returns to the TARDIS to retrieve her phone, while the Doctor and Rory step ahead and examine the door, which has a panel with two buttons. Rory hits the green top one, revealing yet another clinically white waiting room behind it. They enter it, the door closing behind them. Amy, by now, has left the TARDIS, and, figuring them to have gone through the door, hits the red lower button and enters the room.

The two groups can't find each other, causing everyone to freak out. The Doctor observes a strange lens in the middle of the room and on activation, it allows them to see Amy. They try to get Amy to leave the room, but there is no button on her side, and when Rory tries to leave and enter via the second button, Amy's not to be found. The Doctor and Rory are surprised by the appearance of a white, faceless robot with human hands. The Doctor asks the Handbot about the situation and discovers that Apalapucia is in quarantine. It's facing the Chen-7 plague that affects beings with two hearts. They're in the Two Streams treatment facility for plague victims and their loved ones. Through the lens, Amy is yelling at them — because she's been there for a week now. She doesn't need food or sleep or water. She's just very, very scared.

The Doctor, in a panic, realizes that Amy has found herself in an accelerated timestream. It allows an infected being to live out their full life within the very short period that it takes for the plague to kill them. Their loved ones can see that full life unfolding rapidly from the observation rooms though a time lens. When the Handbot fails to recognize them as alien and tries to administer a vaccine, the Doctor warns Rory to stay away, knowing that the dose would be fatal.

The Doctor quickly tells Amy, through the lens, to stay away from the Handbots, because their medicine would seriously harm her human biology. He sonics the lens off the stand and tells her to wait for them, as they'll be there soon. The Doctor and Rory race back to the TARDIS, and the Doctor fiddles with the lens mechanism to use it to lock onto Amy's timestream out of thousands occurring simultaneously in the facility.

Amy, taking the Doctor's advice, steps through into the Two Streams facility proper, and is introduced to Interface, the computer system that operates the facilities. The place is beautiful: there are lush alien gardens, unlimited films and entertainment, a pool, and many adventures to be had. However, the Handbots still want to sedate and disinfect her, which could be lethal to her. Encountering a group of Handbots, she leaves a message for the Doctor and Rory with her lipstick on a door, and then escapes into the bowels of the facility, where the emissions from the time drives interfere with the Handbots' ability to detect her. She finds a quiet spot behind an engine and waits.

After a brief tussle with the TARDIS controls, the Doctor provides Rory with his sonic screwdriver, the lens, and a pair of glasses. The glasses are a camera, wired to relay what Rory sees and hears back to the TARDIS, since the Doctor (having two hearts) can't go inside the facility proper without becoming infected himself. Rory tries to follow Amy's footsteps, but he's soon surrounded by Handbots, ready to sedate him...

... until they're attacked by someone wielding a katana and some very raggedy armour, and get deactivated. It's Amy. Specifically, it's a much older and much angrier Amy. When she realises that the Doctor can hear her, she reveals that it's been 36 years. The Doctor immediately warns Rory that if they choose to save the older Amy, they'll be unable to go back to rescue the younger version without creating a time paradox. Rory tries to convince Amy to help find her younger self, but she adamantly refuses. She no longer wants to be rescued. She wants to be left the hell alone.

Rory is a memory long gone, and the Doctor is her personal devil. If her younger self were to be rescued then this one would die, and 36 years of work would have been for nothing. She tells Rory to just go away. The Last Centurion tries to explain to his wife that age, pain and years of loneliness really aren't unfamiliar to him.

Rory follows the older Amy into the bowels of the facility, discovering where she has hidden herself from detection. There, her own companion is a (literally) disarmed Handbot, on which she's drawn a dorky face and called it "Rory". She also built herself a sonic screwdriver (which she calls a "probe", because to hell with the Doctor's terms), which the Doctor is pretty damn impressed with. Again, the Doctor tries to gain Amy's help, but she flatly refuses. He's the one who left her there. He's the one who abandoned her for 36 years. He's the one who didn't check if the planet would be dangerous before landing. "That's not how I travel," he tries to protest, which earns him an extremely painful What the Hell, Hero? from Rory.

Rory uses the lens to discover younger Amy, in the same room but 36 years prior, sobbing to herself. Rory tries to convince the older Amy to say something to her younger self, but the older Amy can only remain pessimistic, remembering herself on the other end of this conversation and being told there would be no hope. Older Amy just doesn't want to die and when the time comes for younger Amy to be on the other end of this talk, 36 years from now, she'll say the same thing. Time can be rewritten. Younger Amy finally convinces her older self to help, not for herself, but for Rory's sake. The revelation sparks a change in the older Amy and she agrees, but only on one condition: the Doctor must rescue both Amys. Older Amy can live her own life. She can visit the Ponds at Christmas, she can be distant, she can be independent, she'll think of a way to make it work. The Doctor frets, worried about that being too much stress on the TARDIS, but ultimately agrees.

The Doctor sets the plan in motion, requiring Rory to disable a time engine safeguard while both Amys share the same thought: something extremely powerful that can rip open the fabric of time. This thought is... doing the Macarena, because that was her first kiss with Rory. The plan works, and both Amys are present in the same timeline. Older Amy is shocked and very distraught when she realises they're still just the same person, with the same thoughts and the same mind, because they keep saying the same thing at the same time.

The plan worked, but the overload on the time engines causes the glasses to overload, leaving Rory and his wives on their own. They race through the facility, the older Amy using her swordsmanship to defeat the patrols of Handbots converging on their location. As they race through the last hallway to the TARDIS, older Amy steps back to cover their backs. The younger Amy runs smack into a Handbot and is quickly sedated. Older Amy tells Rory to get her younger self into the TARDIS while she clears out the remaining Handbots.

As soon as Rory crosses the TARDIS threshold with his wife, the Doctor slams shut the TARDIS door behind him. As the older Amy pounds on the door, the Doctor explains that he had to lie to get her to work with them. There's no way of allowing both Amys to exist; if they both entered the TARDIS, the paradox would be too great to withstand. The Doctor forces Rory to make a choice of which Amy to rescue, but older Amy ends up making that choice for him, telling Rory to stay true to his wife. They both cling to their own side of the TARDIS door as they're separated forever. As the TARDIS disappears, the older Amy asks Interface to show her Earth one last time as she's surrounded by Handbots and sedated. The screen fades to white, and older Amy vanishes slowly from existence.

In the TARDIS, Amy wakes up to the Doctor and Rory watching over her. She asks about where her older self is, but the Doctor quietly leaves that explanation to Rory.

Older Amy: Show me Earth. Show me home... Did I ever tell you about this boy I met there? He pretended to be in a band...