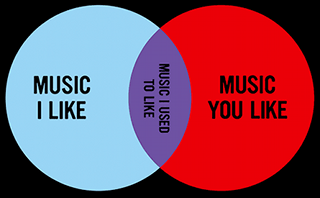 Written by a fictional hipster

. Is it sarcastic self-parody, or dead serious?
"Prototypical non-comformist
You are a vacuous soldier of the thrift store Gestapo
You adhere to a set of standards and tastes
that appear to be determined by an unseen panel of hipster judges
Giving a thumbs up or thumbs down
to incoming and outgoing trends and styles of music and art
Go analog, baby
You're so postmodern
You're diving face-forward into an antiquated past
It's disgusting, offensive
Don't stick your nose up at me!"
— Say Anything..., "Admit It!!"
Advertisement:

In the 1940s, "hipsters" were middle-class white people (often Jewish, or at least ambiguously so) who emulated the lifestyles of black jazz musicians. This was, for them, an existentialist rejection of society. These hipsters were an unorganized movement that eventually morphed into the beatniks of the 1950s and the hippies of the 1960s.

In The New '10s, self-identified hipsters (if such a thing can even be found, as no one seems willing to call themselves by this name) view themselves as intellectuals who reject the mainstream and carefully define their own identities, taking a buffet-style approach to elements of other cultures and subcultures. Your typical hipster outfit will appropriate and/or cannibalize elements from the punk, hippie and rave scenes, plus '90s Grunge and modern geek-chic, as well as some token from a non-Western culture (usually Asian or Native American); lacking the raison d'etre of any of these subcultures, the hipster will instead use an air of sarcasm to tie the ensemble together (the '60s hippie did much the same, only without the irony). Hipsters' musical tastes are eclectic but generally centered around such genres as Indie Pop, Alternative Hip Hop, Post-Rock and minimalist Techno. Particular bands hipsters tend to enjoy include Belle and Sebastian, Ben Folds, Jens Lekman, Animal Collective, Dr. Dog, Best Coast, and all of the Elephant 6 Collective bands (especially Neutral Milk Hotel), although only knowing those bands is only half the battle as an obscure and eclectic taste in music is preferred, and much of which is collected on vinyl. Pitchfork

, a music blog, is probably the most important hipster tastemaker and gatekeeper of the past decade. It's often joked that this is what Emos turn into when they grow up.

It should be noted that while these bands may be popular among hipsters, this doesn't make the bands themselves 'hipster bands'. Conversely, a nominal 'hipster band' may actually be abandoned by hipsters if it becomes too "mainstream". (Arcade Fire, for instance, were written off by many once they found mainstream popularity from its Grammy wins and soundtrack appearances in movies like Where the Wild Things Are and The Hunger Games.) Additionally, a good portion of bands loved by hipsters actively reject the sarcasm, snobbery, and trendiness that often go along with hipster culture. Arcade Fire have been known to throw in jabs at them in their songs ("they will eat right out of your hand/using great big words that they don't understand!") and indie folk group Bon Iver outright defied the label by recording an ultra-sincere, proudly cheesy autotuned Power Ballad for their second album.

Politically, the typical hipster will be center-left, being against "big business" and believing strongly in social justice, but still wary of things like taxes and, like their fashion and music tastes, taking a mix-and-match approach to general views. This is sometimes flanderized into a politically overcorrect liberal strawman who thinks Everything Is Racist and that everything has political undertones. A more modern example that emerged in the 2010s, inhabiting more or less the same side of the political spectrum but with very different preoccupations, is the self-described socialist who fetishizes 20th century "revolutionary" imagery and, still being an upper-middle-class hipster living in a gentrified urban neighborhood, fixates on issues like student debt relief, cannabis legalization, and bringing back rent control that specifically affect people of their background. This kind of political hipster is more likely to identify as working-class, despite otherwise having very little in common, politically or culturally, with actual working-class people.

A critical mind might see hipsters as yet another subculture dedicated to individuality ended up manifesting just as much herd mentality as the mainstream it rejected, along with a tendency to act as though popularity and quality are inversely proportional, and to be aggressively smug (read: shamelessly arrogant) about it. This often leads to parodies of hipsters that boil down to one joke-hipsters as hypocrites concerned with making themselves superior by being different.

Due to this strawman, the term "hipster" is frequently used as an insult, lobbed in the direction of anyone deemed pretentious or the slightest bit "artsy." Further confusing the issue, hipsters themselves will, owing to their "indier-than-thou" attitude, frequently disown any hipster fashions or artists that catch on in the mainstream. One year, hipsters may wear distressed jeans and t-shirts with ironic vintage logos; the next year, self-professed hipsters will stop wearing those because they're available at every Walmart in America, while the latecomers who start wearing those will still be labeled hipsters by outsiders. This only further contributes to the decay of the label (although the term "scenesters" is sometimes used for these johnny-come-latelies). But the real reason hipsters get so much hate is probably just the perceived smugness.

Those unfamiliar with subcultural and countercultural movements will often confuse Goth, Punk, Raver and Emo with the Hipster subculture, using "hipster" as a catch-all term for any quirky or alternative music or fashion, including those affiliated with other subcultures. This is a huge, huge Berserk Button for anyone involved in any of the aforementioned alternative subcultures.

See also I Read It for the Articles. Not to be confused with Rule of Cool or Isn't It Ironic? (It is.)

Usually this trope is in opposition to "The Man". Yeah, we just had to point that out.

Bill ends up at a burger joint for trendy citizens.

Bill ends up at a burger joint for trendy citizens.