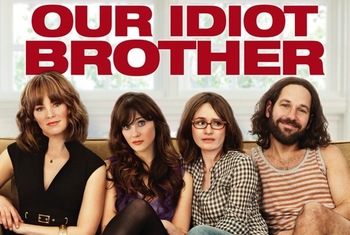 Or "Saying Too Much: The Movie"
Advertisement:

Ned Rochlin is an organic farmer who gets busted selling marijuana to a uniformed cop (the cop said he had a rough week) and spends eight months in jail. After getting out and evicted from his ex-girlfriend's farm, he now has to live in Manhattan with his three sisters while he works different odd jobs to get enough money together to rent a goat barn. There's also a subplot of him trying to get his dog back from his ex-girlfriend.

The following tropes appear in Our Idiot Brother: