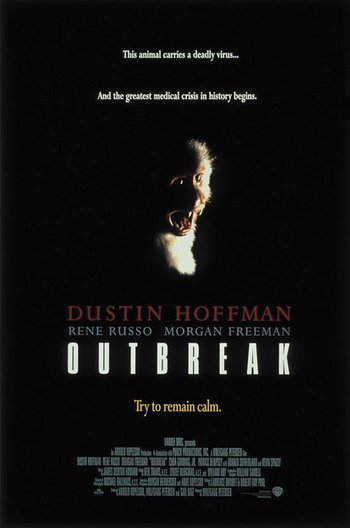 Imagine you are hunting a killer. The perpetrator is insidious, invisible, and deadly. It is reactive and fast. Its victims suffer and die in horrifying pain. There is no reasoning with it, no bargaining with it, and no way to stop it. The military wants to avoid a panic. The media questions the methods being used to stop it. It is a billionth your size.

Outbreak is a 1995 suspense film directed by Wolfgang Petersen and starring Dustin Hoffman, Rene Russo, and Morgan Freeman (among many others: Donald Sutherland, Kevin Spacey, Cuba Gooding Jr., Patrick Dempsey, etc.), depicting a what-if scenario surrounding a deadly fictional African virus called Motaba, inspired by real-life Ebola outbreaks, and speculating on the measures taken by the military and the Center for Disease Control if such an outbreak occurred in the United States.

In 1967, a deadly virus, Motaba, ravages a war-torn African village. The U.S. Army sends in colonels Donnie McClintock (Sutherland) and Billy Ford (Freeman) to appraise the situation, and they promise to send for help. But what's really sent is a fuel-air-bomb which vaporizes the village and everyone in it.

Flash-forward thirty years, when an infected monkey from this very area has been captured and smuggled to the United States, and into the hands of Jimbo (Dempsey), a young man who plans to sell it for the pet trade.

The smuggled monkey spits in Jimbo's face, on his way to sell it. When it turns out unsuitable (after having scratched the pet shop owner and having lost her banana to another monkey in the shop), Jimbo sets it free in California and hops a flight home to Boston — during which he falls seriously ill. He greets his girlfriend with as passionate a kiss as he can muster, then passes out.

In Boston, Dr. Robby Keough (Russo) takes care of the victims of the infection, and that's that. But the cat is out of the bag. Cedar Creek, California becomes infected with a mutated and airborne strain of the virus.

Following his instincts, Sam Daniels (Hoffman) disobeys orders and goes to Cedar Creek. His crew is dispatched and Daniels is allowed to work despite having disobeyed. With Robby's help, they race against time to find a way to cure the deadly virus.

Meanwhile, the Army, seeing projections of the virus' progress across the North American continent, advises the President to take drastic measures... without sharing with him the information that they have a cure for the African strain and want to be able to use it as a biological weapon. McClintock concocts a plan to firebomb Cedar Creek.

Can Daniels find a way to cure the new Motaba strain and get it back to Cedar Creek before the Army wipes it out to save the country and keep their weapon?

The film was nominated for various awards but failed to garner any major award nominations. Notable in that it was set-up as a counter-production to a film adaptation of the novel The Hot Zone that never materialized.