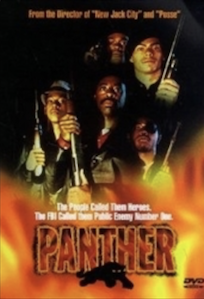 Panther DVD cover
Panther is a 1995 American Afro-American/historical/political/drama/biopic that is based on Melvin Van Peebles's novel, Panther, which itself is based on the events of the Black Panther Party organization that came out of the Civil Rights Movement. It was co-produced by Poly Gram Filmed Entertainment, Working Title Films, Tri Be Ca Productions, and MVP Films, with Gramercy Pictures as the distributor. The all-star cast consisted of, among others, Kadeem Hardison, Anthony Griffith, Angela Bassett, Courtney B. Vance, M. Emmett Walsh, Bobby Brown, Chris Rock, Jenifer Lewis, Dick Gregory, and Tyrin Turner. The director was Van Peebles's son, Mario Van Peebles, who also appeared in this. This movie has the notable distinction of being the first to revolve around the Black Panthers.
Advertisement:

Beginning in the late 1960s, in Oakland, following a tragic incident in which a black boy is killed, a group of several American blacks decide to follow in the footsteps of civil rights leaders Martin Luther King Jr. and Malcolm X by forming the Black Panther Party. Fighting both for justice and for the cause of equal rights.