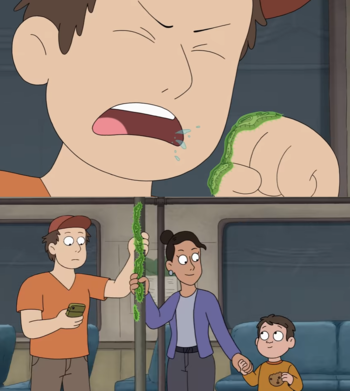 Without a microscope, it's impossible to know whether a person or object is contaminated with germs. Because of this, many stories encourage people to be hygienic and vigilant to avoid getting infected or infecting others. To make this clear, it'll often show the exact moment somebody contracts a disease, cluing in the audience before the person even knows they're infected. It can come before the character gets sick to serve as foreshadowing, or a flashback can show how an already-sick character caught the illness- even showing an earlier scene with more obvious focus on the contaminated things they touched. There may be a montage of these scenes that show the illness jumping from person to person, setting up a full-blown epidemic.

Generally, the ways of highlighting somebody getting infected fall into two categories, which are not mutually exclusive:

Often seen in a Sick Episode. Can be Five-Second Foreshadowing when these scenes come shortly before the character gets sick. If the character's symptoms begin in the same scene as the infection, that's Instant Illness. Overlaps with Typhoid Mary if the disease is deadly and the person spreading disease is asymptomatic. This may lead to a Contamination Situation, or happen during it to indicate that containment has failed. For the germophobic, this can be sheer Paranoia Fuel.