Blood from Every Orifice 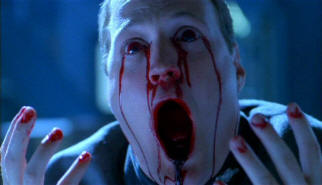 I think you're gonna need more than a couple of tissues for that.
Advertisement:

We all know that when a character starts coughing up blood, it's a bad sign, and nosebleeds can be similarly ominous. Therefore, if you want to kick those tropes up a few notches and really hammer home how doomed a character is, just have them bleed from everywhere: mouth, nose, ears, eyes, and even some other places if you really want to gross out the audience.

Such an extreme case of bleeding is usually reserved for deaths that are out-of-the-ordinary; it might be caused by magical or psychic powers, advanced technology, aliens, or just a really nasty and probably contagious new disease.