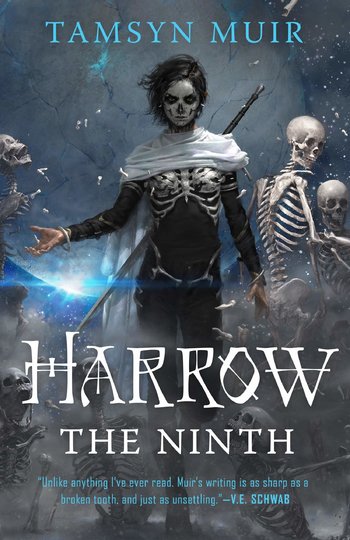 From his far-off sanctum deep within the Mithraeum, you heard him exhale. You imagined him sitting in his patchy, worn-out chair, all alone, worrying his right temple with the thumb he always worried his right temple with. After a brief pause, he said: "Harrow, please don't be in such a hurry to die."
"Do not underestimate me, Teacher," you said. "I have always lived."
Advertisement:

Harrow the Ninth is the second book in The Locked Tomb series by Tamsyn Muir. It was released on August 4th, 2020.

Harrow has won. She has received everything she ever wanted: immortality, an eternity of service to God, and the restoration of her dying House. She will be forever remembered as the Ninth Saint to serve the King Undying. All it cost her was her cavalier.

Everyone acts very strangely whenever Harrow speaks her cavalier's name, but she has bigger problems. Bigger problems than her malfunctioning Lyctorhood, bigger problems than her constant headaches and nosebleeds and bizarrely fast-growing hair. She has been trapped in the Mithraeum, the Emperor's flagship fortress, with four other Lyctors and the Emperor himself. A Resurrection Beast, one of the planet-eating monsters born from the murder of a planet, is coming for them. It is already too close to escape, meaning that she will have to learn to fight it. Over the course of ten thousand years, only five have ever been destroyed, mostly through luck and the sacrifice of immortal Lyctors. Now, she must survive with no experience, and a body with malfunctioning immortality.

Throughout it all, she remembers her time exploring Canaan House with her cavalier, Ortus Nigenad. He was a terrible cavalier, too old and too fat and too weak, but he was her only option. There was never anyone else.

Well, there had been another girl who grew up alongside Harrow - but she had died before Harrow was born.