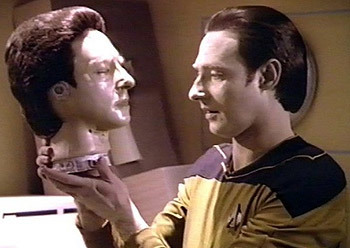 Common in science fiction and fantasy, the Emergent Human is a character who is new to sentience, sapience, or human existence, and shown to be in the process of adapting to the most basic elements of life as we know it.

These can be robots, demons, clones, fallen angels, or nearly any other sort of being stuck in human form; any character for whom life as a human only began very recently is susceptible to this trope.

What matters is despite appearing human and living among us, they are essentially naive newcomers to the human condition. More than mere cultural outsiders, they are treated as walking blank slates, largely free of any relevant or irrelevant knowledge, experience, or biases.

Expect this character type to have difficulty with figuring out how to handle everything from basic bodily functions to common emotions to complex philosophical or spiritual questions that no one will answer to their satisfaction. Their stunning naivety is frequently matched with an insatiable curiosity and lack of inhibitions that puts their lack of experience on full display; however, they are rarely dumb. In fact, examples of this trope are quite frequently possessed of genius-level or superhuman intelligence, though this rarely helps their predicament as much as you'd think. In some cases everything seems to come easily to them except for those things that come intuitively to most of us, in which case the message is that humanity is hard, and by extension, Humans Are Special. Alternately, this character type's tendency to be logical, Literal-Minded, and ostensibly objective makes them great mouthpieces for the author's opinions on the shortcomings of humanity, or deliverers of punchlines regarding the absurdities of the same.

Though not commonly evil, in darker works, this character may commit evil acts without full understanding of the ramifications of their actions. More commonly, they may be unfairly persecuted by heartless, otherness-fearing authority figures from outside the main cast, or fall under brief suspicion from their friends in the face of overwhelming evidence of a otherness-induced Face–Heel Turn, only to have their names cleared by the end of the episode.

It is common for an Emergent Human to start off with No Social Skills. Usually adult in form to contrast with their psychological immaturity and lack of self-understanding, their character arc may mirror that of a child growing into maturity. Then again, if this is a comedy, or the character's usual way of seeing things makes them popular, or if their innocence or helplessness is sufficiently sexualised, their progress as individuals is likely to be hampered by the fact that Status Quo Is God.

May be an Alien Among Us when a character's alien experiences are so irrelevant that they're more or less starting from scratch. If this character just wants to be like everyone else they may have Pinocchio Syndrome; conversely, they may be working on getting along as a human reluctantly, because they haven't got another option. Contrast with Become a Real Boy, where becoming a fully fledged and well-socialized human is instantaneous following a suitably dramatic plot point, and tropes such as Ridiculously Human Robots and Mechanical Lifeforms, which revolve around beings who might as well be human in personality, if not physiology. Also compare/contrast with Humanity Is Infectious, where the character's mindset is slowly becoming humanoid just by being around humans long or intimately enough.