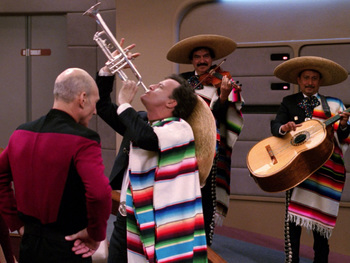 Is this the end of Q? Au contraire, mon capitaine! He's back!
Advertisement:

The Enterprise is preparing to help the planet of Bre'el IV. A moon is slipping out of orbit, and if they don't do something, it will strike the planet and cause immense devastation. Suddenly Q appears on the bridge, floating in the air and completely naked. He falls to the floor and says cheekily, "Red alert."

After being given some clothes, Q announces that the Q Continuum has kicked him out, stripped him of his powers, and banished him to a mortal form. Given a fraction of a second to decide what to be turned into and where to be sent, he chose human form and requested to be sent to the Enterprise. Since Q has toyed with the crew on numerous occasions already, Picard is not convinced that this isn't some attempt at a "puerile joke" and demands that Q fix the moon. Q insists he cannot because he has no powers. Picard is still skeptical. When asks what it would take to prove that he is indeed mortal now, Worf quips that he should "die."

Picard has Worf escort Q to the brig. After spending some time there, Q begs Picard to let him out, telling him that he can assist him with the whole moon problem, saying that while he might not have his powers any more, he still remembers a lot about astrophysics. Picard finally agrees to let him out and puts Data in charge of him. While working with Data and Geordi, Q says that all they need to do is change the gravitational constant of the universe. Geordi scoffs at that notion, but then realizes that proper application of the ship's power could create a local warp field around a part of the moon, allowing for a gravitational adjustment sufficient to solve the problem.

Q is new to all human experiences, including sleep and pain. When he realizes that he's hungry, he accompanies Data to Ten-Forward, where he meets Guinan. The two nemeses square off, and Guinan tests his claim of being human by stabbing his hand with a fork, causing him to yelp in pain. Suddenly, aliens called the Calamarain find and attack him. Guinan remarks that many of Q's old enemies will try to "look him up" now that he's helpless. Raising the shields succeeds in repulsing the Calamarain, but they don't leave.

Q's decision to seek sanctuary on the Enterprise is starting to make more sense to the crew. He's made quite a lot of enemies who would all like a little payback for his cruel games. Q admits that he is exploiting the human nature of the crew to value compassion and forgiveness and even suggests that he could learn to better himself. Data vouches for Q's value, noting that he helped figure out a solution to the moon problem. Picard relents and allows Q to stay on the ship and continue his work

The Calamarain continue to attack the ship and manage to blast it into the planet's atmosphere. A Calamarain manages to get past the shield and attacks Q directly, but Data jumps to save him, taking the bulk of a powerful shock from the creature meant for Q, knocking both of them out.

While Q is relatively unfazed, the damage to Data is severe. As Doctor Crusher and Geordi try to repair the android, Q downplays Data's heroics and makes a nuisance of himself until Crusher kicks him out of Sick Bay. With the Calamarain still committed to attacking him, however, he's still a liability to the ship. Geordi tells Picard that they need to drop their shields to fix the moon, which would probably prompt the Calamarain to try to attack Q again. In Geordi's opinion, Q is not worth saving.

As Picard mulls over recent events in the ready room, Q enters to speak with him. Q admits that Picard is completely right in calling him extremely selfish, noticing that it served Q well when he was omnipotent, but he realizes that as a mortal it is a really poor trait. In fact, the brush of death he received with the Calamarain's attack has caused Q to seriously ponder his mortality and himself. He realizes that if he died, no one would miss him. Further, he never would have made the same sacrifice for Data, which makes him ashamed. He announces that, without his powers, he's just a frightened, miserable coward and concludes, "I can't go on this way."

Q visits the now-conscious Data in the sickbay and thanks him for saving his life, earnestly telling him that while he still finds the android's desire to be more human weird and rather ridiculous, he has already proven that he is a better human than himself. Q then takes a shuttle-craft out to offer himself up to the Calamarain and leave the ship free to save Bre'el IV. Picard contacts the shuttle-craft and tries to talk Q out of it, but Q refuses, saying that with this act of self-sacrifice he can at least achieve something worthwhile before he dies. Against Picard's better judgment, the crew tries to rescue him, but finds that all of the controls that could retrieve or protect the shuttle-craft are suddenly non-functional, without any explanation.

Another Q appears on Q's shuttlecraft and explains that, due to the selfless act he just committed, the Continuum decided he could have his powers back if he promises to at least try to show some better behavior and not randomly torment lower lifeforms for kicks as often as last time. Q gleefully snaps his fingers and gets his Starfleet uniform back. He then turns on the Calamarain, preparing to wreak his vengeance on them, but the other Q briefly reappears and gives him a stern warning, so Q just dismisses them.

On the Enterprise, the crew believe that Q has been destroyed by the Calamarain and have an awkward moment of silence as they process his sacrifice. But then Q appears on the bridge as part of a mariachi band, triumphantly proclaiming that not only is he still alive — he has his powers back and he wants to celebrate. He tries to reward the bridge crew with cigars and floozies, but they settle back into their old routine of stiffly refusing to play his games.

Q agrees to cut it out but then announces that he does want to give Data one very special parting gift as his way of saying thanks for being his "professor of the humanities". Data starts to warn him not to transform him into a human, but Q assures him that he would never "curse" him by doing something like that. After Q leaves, Data suddenly breaks into a bout of hysterical laughter. When Geordi finally asks what's so funny, the spell is broken and Data settles down. He admits he has no idea what he was laughing at, but it was "a wonderful... feeling."

Further, the crew realize that Q has fixed the moon's orbit for them. The inhabitants of Bre'el IV joyfully thank Picard and his crew. The nonplussed Picard prepares to get the ship underway, and muses, "Perhaps there's a... residue of humanity in Q after all." He raises his hand to say "Engage" when a lit cigar flashes into his hand and Q's face appears in the smoke, saying, "Don't bet on it, Picard."

When none of the Enterprise crew believes that Q has been stripped of his powers, Q asks what he should do to convince them otherwise. Worf then gets his jollies with a single word...

When none of the Enterprise crew believes that Q has been stripped of his powers, Q asks what he should do to convince them otherwise. Worf then gets his jollies with a single word...