Recap / Star Trek: The Next Generation S3E16 "The Offspring" 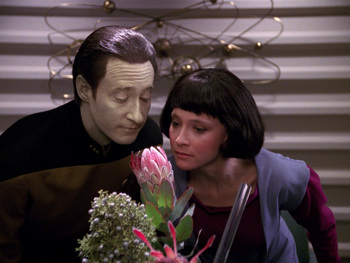 Data and his android daughter, Lal.
Data: I can give her attention, Doctor, but I am incapable of giving her love.
Beverly Crusher: Now why do I find that so hard to believe?
Advertisement:

Data has been acting unusually secretively since returning from a cybernetics conference. The reason soon becomes clear when he calls in Geordi, Troi, and Wesley to meet his creation, Lal, an android patterned after himself whom he regards as his child.

Picard marvels at the achievement but objects to the fact that Data went about it without his knowledge, pointing out that the ability to create new sentient androids could have sweeping consequences for the galaxy. Unrepentant, Data affirms that Lal is his offspring, and nobody else on the ship has to get the captain's permission to procreate. Picard concedes, but goes ahead and notifies Starfleet of this development.

Picard is soon contacted by Admiral Haftel, who says that Starfleet Command wants to move Lal to an advanced research facility to study her and help her develop. Further, they do not want Data to have any further influence on her. Picard tells Haftel that Data considers Lal his child and will not concede to have her taken from him. To settle the matter, Haftel will rendezvous with the Enterprise and make a final decision.

Meanwhile, Data is teaching Lal everything he can about humans and functioning in human society. He allows her to choose her own gender and form, and she chooses to become a human woman. Data enrolls her in school, but the other children shun her. To help her learn social skills, Data instead enlists Guinan to give her a job as a waitress in Ten-Forward. After learning about kissing, she plants a big smooch on Riker, who has just returned from shore leave and has no idea who she is.

Haftel arrives onboard and makes no pretense of considering any option but the removal of Lal, insisting that it will be better for her development. But Lal seems to already be exceeding Data's abilities. Not only does she use contractions, but she also starts experiencing actual emotions. Unfortunately, the emotion is fear at the prospect of being forcibly parted from her father. Data and Picard's arguments fail to move Haftel, and he orders Data to relinquish Lal. This breach of basic civil rights so offends Picard that he puts his own career on the line to oppose it.

The point turns out to be moot, however. Lal's emotions were apparently an early symptom of a fatal cascade fault. Data and the Admiral put aside their differences to try to save her, but their efforts are ultimately in vain. Lal dies after telling her father she loves him, but Data transfers her memories to his own neural net so she will always remain a part of him.

Not Talking About Parenting!

In "The Offspring" from "Star Trek: The Next Generation," Picard is astonished that Data does not seem to understand his point regarding the full scope and potential consequences of his decision to create an android offspring, resulting in the famous Picard double facepalm.

Not Talking About Parenting!

In "The Offspring" from "Star Trek: The Next Generation," Picard is astonished that Data does not seem to understand his point regarding the full scope and potential consequences of his decision to create an android offspring, resulting in the famous Picard double facepalm.