Recap / Star Trek: The Next Generation S3E17 "Sins of the Father" 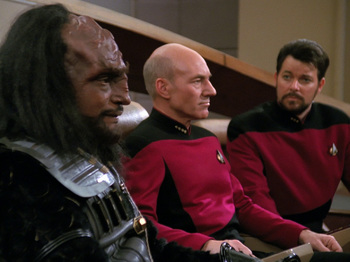 It's, uh... always nice to have a new face on the bridge?
"I am Worf, son of Mogh. I have come to challenge the lies that have been spoken of my father!"
— Lieutenant Worf
Advertisement:

The USS Enterprise takes on a Klingon commander, Kurn, who has been temporarily assigned to the Enterprise as acting first officer as part of the Federation-Klingon Officer Exchange Program, in return for Riker serving in a similar role aboard the IKS Pagh back in "A Matter of Honor." Kurn immediately begins to impose "Klingon-style" discipline aboard the Starfleet vessel, with Captain Picard's approval. The surprised crew find Kurn's methods excessively harsh — except for Worf, whom Kurn treats like a child, giving him easy assignments and exaggeratedly praising his efficiency during a minor course correction. Worf slowly begins to bristle at this babying treatment.

After a dinner for the senior officers gives Kurn another opportunity to insult Worf for liking human-style food, Worf goes to Kurn's quarters to demand an explanation. Kurn goads Worf into angrily declaring his Klingon heritage, and Kurn's demeanor abruptly shifts. He's been testing Worf to see just how Klingon he is, revealing that he is really Worf's younger brother.

Kurn explains that he had been left behind with family friends as an infant when Worf and his parents went to the Khitomer colony for what was supposed to be a brief visit. They adopted and raised him after the massacre, while both the Federation and the Klingons believed that he had been killed with his parents. Kurn has sought Worf out because their father, Mogh, is accused of treason by the Klingon High Council. Supposedly, he had lowered the shields of the Khitomer outpost just before the Romulan attack. Kurn engineered the assignment aboard the Enterprise to find Worf and ask him to challenge the judgment as Mogh's elder son.

Worf explains this to the captain, asking for leave to pursue the manner. Picard is puzzled; why is all of this happening now, about twenty years after the massacre took place? Worf doesn't know, but the man behind the accusation is Duras, whose family has been the greatest rivals of Worf's family for generations. Worf further explains that being labeled a traitor is a serious allegation in Klingon society, which blemishes not just the name of the accused, but also marks his descendants for seven generations. Worf, of course, feels strongly obligated to challenge this claim, hoping to either clear his father's name or answer for his crimes, as the family of a Klingon warrior is responsible for his actions and he is responsible for theirs: if Worf can not successfully refute the accusation, he will be executed in his father's place. Picard says that since Worf is accused of a capital crime, it would be better if he were standing at Worf's side as he made his challenge, and commands Kurn to set course for the Klingon homeworld.

In Ten Forward, Kurn asks Worf if he can be his Cha'DIch, or ritual second. While Worf is accused, he will not be allowed to participate in any duels or fights. Worf accepts, although he tells Kurn that he must not reveal his true bloodline. Kurn, not happy about this, correctly guess that Worf is trying to protect him from being executed alongside him in the event he should fail. Kurn points out that a Klingon's honor means more than his life, but he reluctantly agrees when Worf answers that, as his Cha'DIch, he has no right to refuse this order. Once they arrive at Qo'noS, Worf and Kurn beam down with Picard and Riker accompanying them. Worf pronounces his challenge before the Council and faces the allegations of Duras. Duras accuses Worf of forsaking his heritage for the Federation, but Picard tells the council that Worf has served under his command with distinction, earning Picard's admiration and respect.

Duras states his allegations and accuses both Mogh and Worf of being traitors, backhanding Worf in the traditions of their people. Duras then rips Worf's baldric off of him, telling Worf he is unworthy to wear the emblems of their people. Worf replies, "It is a good day to die, Duras, but the day is not yet over."

During a recess of the council, Chancellor K'mpec, who knew Mogh personally, privately meets with Worf and asks him why he decided to challenge the accusation, which would not have affected his life in the Federation. When Worf simply answers that he is Klingon and therefore must defend his family's honor, K'mpec asks him to return to the Enterprise and leave the planet before the final judgement, telling him that the challenge will be quietly forgotten and no shame will come to him. Worf reacts with shock and dismay at this seemingly un-Klingon request. Picard, meanwhile, uses the recess to ask the Enterprise crew to find all the available information on the Khitomer massacre, as well as the most important lore on the Klingon justice system and its associated customs.

Meanwhile, Duras confronts Kurn and reveals that he knows his true bloodline, attempting to blackmail him into turning against Worf. When Kurn vehemently refuses, Duras signals a pair of assassins in his employ who attack Kurn and seriously wound him. With Kurn recovering in the Enterprise's sickbay, Worf asks Picard to be his new Cha'DIch. After some hesitation, Picard replies, "jIlajneS. ghIj qet jaghmeyjaj." ("I accept with honor. May your enemies tremble before you.")

The Enterprise crew continue their investigation and discover that the Klingons recently captured a Romulan ship with information about Khitomer in the ship's logs, which is how they found out about the treachery. By comparing the information in the Klingon archives with the logs of the first Federation ship on the scene, La Forge and Data discover that there is a discrepancy in the transmissions — the evidence that supported Mogh's guilt was faked. It's also discovered that Worf's nurse, a woman named Kahlest, was the only other survivor of the massacre. She was also rescued by the Federation and returned to Qo'noS.

Picard journeys into the Old City and finds Kahlest's home, where he tries to persuade Kahlest to accompany him back to the High Council chamber, telling her that the family that she once served proudly needs her again. Kahlest has fallen into despair, and refuses — until Duras's assassins attack again, and Kahlest saves Picard's life as they fight them off.

Just as K'mpec is about to pronounce judgment on Worf, Picard enters with Kahlest, who swears before the council that Mogh was innocent. In response K'mpec quickly calls for a recess. In a private session, Picard demands that Kahlest is to be allowed to testify in open council in accordance with Klingon law. Duras is almost hysterically against it. K'mpec silences him by asking him if he would really kill an old woman to cover his dishonor, making it clear that it was Duras's father Ja'rod, not Mogh, who betrayed the colony to the Romulans.

K'mpec, clearly weary and demoralized, tells Worf that he should just have left quietly when he personally requested it of him, before he explains the truth. When Klingons captured the Romulan ship with the records, they learned of the treachery behind the Khitomer Massacre; this soon became common knowledge, and someone had to answer for that treachery. The Duras family has become too politically powerful, and to expose Ja'rod would likely split the Empire and cause a civil war, so Mogh was blamed instead, since Worf, off in Starfleet, would not be likely to challenge the judgment. No one realized that Kurn was Mogh's second child—but now both of them must die in order to complete the frame-up. Declaring Worf's challenge successful, Picard refuses to hand Worf and Kurn over for execution, over K'mpec's threats to end the alliance with the Federation.

Worf, however, volunteers to die for the sake of the Klingon Empire, over Picard's objections in return for Kurn's life. Duras rejects this, as Kurn's honor would then demand revenge. Worf then offers to accept discommendation if Kurn will be allowed to live, in effect admitting his father's guilt and being exiled from the Empire. Before they proceed, Worf calls Duras the son of a traitor and backhands him as tradition demands.

Kurn is heartbroken by Worf's decision, telling Picard that he was ready to die for Worf, but Picard tells Kurn that there will be another day to fight, and he must live in order to restore the honor of Mogh's family.

Picard and Kurn join Worf in the middle of the council chambers and the council members gather in a circle around Worf. Worf says the ritual words, "tlhIH ghIj jIHyoj" ("I fear your judgment"); K'mpec replies, "biHnuch!" ("Coward!"), and one by one, the Council members cross their arms and turn their backs on him in ritual ostracism. Worf softly tells Kurn that he must do the same. Almost on the verge of tears, Kurn complies. The whole assembly having turned their backs, Worf and Picard leave the Council Chamber and return to the Enterprise.