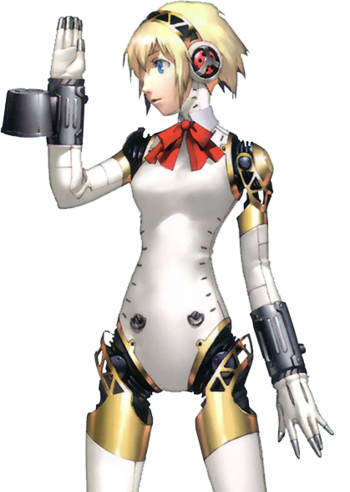 Body of titanium, heart of gold.
Charley: You know, little girl, you freak me the hell out. On the outside, you're just pretty as a picture, but on the inside, you're a...
Cameron: Hyperalloy combat chassis.
Charley: ...is that a complicated way of saying "scary robot"?
— Terminator: The Sarah Connor Chronicles
Advertisement:

She's gorgeous, she's sexy, and she's got a 50,000-mile warranty. She's the Robot Girl, a staple character archetype in anime. Most commonly found in science fiction and Sentai stories, but not exclusively. Despite their artificial nature, Robot Girls are never — well, hardly ever — sexless; they are at the very least cute as hell, and more often drop-dead gorgeous, if not outright seductresses. Robot Boys are not unheard of, but they usually take on more robotic characteristics than Robot Girls do. Despite how cute or sexy she may be, though, the Robot Girl is often a dangerous opponent in a fight, even if they're only created to do common household chores.

Common characteristics of a Robot Girl are their artificial human-like skin that covers their inner frame as opposed to metal or plastic plating (such as the Fembot), a beautiful and fully articulated face, synthetic hair and other organic characteristics that makes them appear and feel more human than any other types of humanoid robots. Think the Terminator but as a cute girl. (Which has been done already.)

Sometimes the character is shown to be an android by some unusual accessory to cue the audience. Due to the popularity of To Heart's Multi, having headphone cups, air vents or antennae for ears is almost universally understood. Other times, like Aigis (pictured at right), visible mechanical joints are another dead giveaway.

However much the robot girl trope slides closer from either end of the anthropomorphism scale, their human face and hair will almost always be the last thing to be roboticized by any character designer aiming to invoke this trope. Their arms or legs may even be fully robotic but their human torso will almost likely be preserved in the design. Often opting for a skin-tight hi-tech looking jumpsuit to emphasize their feminine features such as many of the female robots of the Mega Man franchise and its many offshoots.

The robot girl is not necessarily always depicted as a mechanical being. The character type can also encompass cyborgs, Artificial Humans, Artificial Intelligences and Virtual Ghosts with female on-screen or holographic avatars.

While not unheard of in American shows (My Living Doll, Small Wonder, Mann & Machine) the robot girl on American TV tends to be a gimmick or MacGuffin on which to hang a series concept rather than a character type in its own right.

Of course, Japan being the worldwide leader in consumer electronics, androids are quite popular in that country. These androids could be male, but because Most Writers Are Male, most of them are sleek, sexy females. (Technically they would be gynoids, if one cares.)

Very often an Innocent Fanservice Girl. After all, why in the world would a drop-dead gorgeous female facsimile have any conception of chastity, much less modesty, programming notwithstanding? If the Robot Girl is the lead female or at least an important one, this innocence and naivety can be a large part of their character or even the theme of the work.

Robot girls are often, but not always, depicted with a monotone emotionless personality to further emphasize that they're a robot and not an actual girl. Examples of this have included Cameron from Terminator: The Sarah Connor Chronicles, Eve Edison from Mann & Machine and Rhoda from My Living Doll. Unless, of course, the robots are programmed from the start to simulate - or even genuinely experience - emotion, such as the Cylons from Battlestar Galactica (2003) or the Replicants from Blade Runner.

Compare Fembot (for when Robot Girls are more robot than girl), Projected Man (for when the Robot Girl is a hologram) and Robosexual (and Sexbot). A few may also be a Robotic Spouse. Contrast Uncanny Valley Girl and Spaceship Girl.