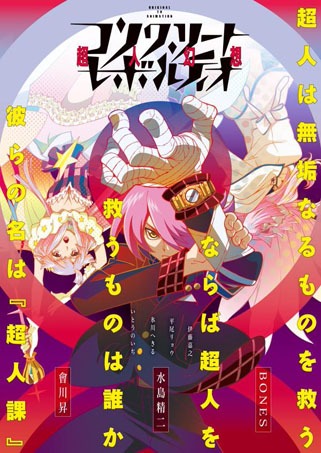 Concrete Revolutio: Choujin Gensou (the subtitle meaning "Superhuman Fantasy"), is an Anime First Fall 2015 Anime by Studio Bones, directed by Seiji Mizushima and with a script done by Sho Aikawa. The second season aired as part of the Spring 2016 Anime lineup, titled Concrete Revolutio: The Last Song. It has a manga running in Young Ace as of the September 2015 edition, and its official website is here

In a fantastic version of The '60s, Jirou Hitoyoshi is a member of the Superhuman Bureau, who strives to protect superhumans for the sake of the government. Five years later he is a wanted criminal who opposes the Bureau's actions with every fiber of his being. In a period of great cultural upheaval, can true Superheroes exist or are they just a fool's dream?

Concrete Revolutio is a very information-dense series, with each episode making heavy reference to both historical events and iconic fictional characters of the time, as well as how each is warped by the other's presence. This is a world where student protests are backed by Kaiju, and where G.I. Joe has PTSD from fighting in Vietnam. It's often summed up as "a more confusing, Japanese take on Watchmen".

Examples of tropes in Concrete Revolutio: