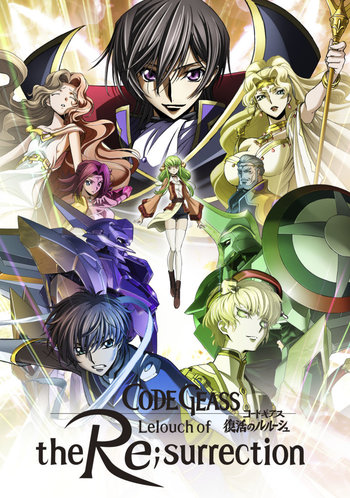 Code Geass: Lelouch of the Re;surrection is a 2019 Animated Film sequel to Code Geass, directed by Goro Taniguchi, written by Ichiro Okouchi and produced by Sunrise.

One year after the events of Zero Requiem, the world has unified around the reorganized United Federation of Nations and regained the semblance of peace. However, following that peace is soon broken when Suzaku Kururugi, now operating as the masked man "Zero", and Nunnally vi Britannia are assaulted by a mysterious new Knightmare frame and kidnapped while visiting a refugee camp.

In response, Schneizel el Britannia tasks Kallen Kouzuki, Lloyd Asplund and Sayoko Shinozaki with infiltrating the Kingdom of Zilkistan, a small country known as the Land of Warriors and one of the few countries that successfully drove off the Holy Britannian Empire, where Schneizel suspects Nunnally was taken. In the process, the group discover both a set of new geass users, and C.C., Lelouch's mysterious immortal ally who has been traveling the world for the last year for unknown reasons.

The film was released in Japan on February 9, 2019. A North American limited release is scheduled for May 5 (subbed) and May 7-8 (dubbed), 2019 to be distributed by Funimation, following premiere screenings at select anime conventions (AnimeBoston 2019 on April 20th for the East Coast, and another a week earlier on the West Coast). An Australian release by Madman Entertainment is scheduled for May 16, 2019 (following a premiere screening at MadFest Sydney on March 17).

A manga prequel is being serialized by Kadokawa's Comic Newtype, written/drawn by Tomofumi Ogasawara. It explains what happened after the compilation movies, but prior to the events of Re;surrection.

Be warned: spoilers from the compilation movies will be left unmarked.

When Ohgi attempts to shoot himself as atonement for betraying Zero years ago, Lelouch stops him by simply tellling Ohgi that it's all in the past.

Example of:
Talking Down the Suicidal

When Ohgi attempts to shoot himself as atonement for betraying Zero years ago, Lelouch stops him by simply tellling Ohgi that it's all in the past.