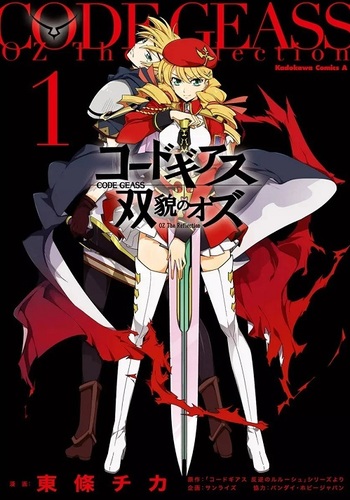 A Spin-Off of the Code Geass franchise, Oz the Reflection uses the same formula as the highly successful Mobile Suit Gundam SEED Astray, using different mediums to tell an interconnected story of two long-lost siblings, both nicknamed "Oz" by their friends. The manga component focuses on Oldrin Zevon, a member of the Glinda Knights (Britannia's anti-terror taskforce) and pilot of the Lancelot Grail. The photo-novel focuses on Orpheus Zevon, member of the anti-Britannian terror group "Peace Mark" who seeks vengeance for his lover's murder. A Picture Drama was released on January 10th 2013 attached to that month's issue of Newtype Ace.

The story begins when Oldrin and Orpheus meet in person in the Middle East...

Oz the Reflection is one of two canon spinoffs following the Code Geass revival. The other, Code Geass: Akito the Exiled, also occurs in the same timeframe.