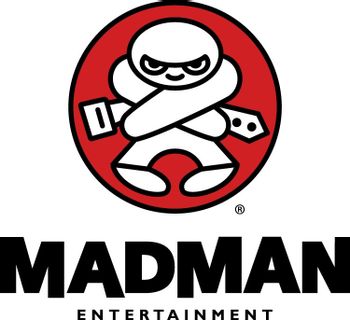 "Running a team of vigilante bounty hunters is something that I've always aspired to do."
—Madman co-founder Tim Anderson, from an extra on the Australian DVD release of Bubblegum Crisis 2032, the company's first acquisition
Advertisement:

has grown into one of the largest entertainment companies in Australia and New Zealand, accounting for 97 percent of all anime DVD sales in Australia, with an annual turnover of around $50 million AUD. In addition to anime and manga, Madman Entertainment distributes other mediums and genres such as Australian television (mostly from SBS), Asian cinema, Bollywood, action sports and independent films. They also have the distribution rights to original Cartoon Network and Adult Swim series.

Madman secured the local release rights to multiple franchises including AKIRA, Bleach, Dragon Ball, Naruto, Neon Genesis Evangelion, One Piece, and almost all of Studio Ghibli's catalogue. In addition to DVD sales, Madman manages the theatrical release of some of their titles, particularly the Studio Ghibli movies.

Madman also sublicenses anime from AnimEigo, Bandai Entertainment, Funimation, Harmony Gold, Sentai Filmworks, Viz Media, and formerly ADV Films and Geneon. Madman and Manga Entertainment Australia Ltd merged in 2003. This happened so if Manga lost a license in Australia, Madman would pick it up. If Madman Entertainment lost the license for anime from American companies, Manga UK would sub-license anime to Madman.

In May 2014, they officially opened the streaming service AnimeLab

which is geolocked for residents of Australia and New Zealand. They love to point this out since many services in the U.S. have geoblocked these countries.

They're really Aussie. Dodgy, but enthusiastic.

Madman Entertainment has started their own studio, Madman Productions