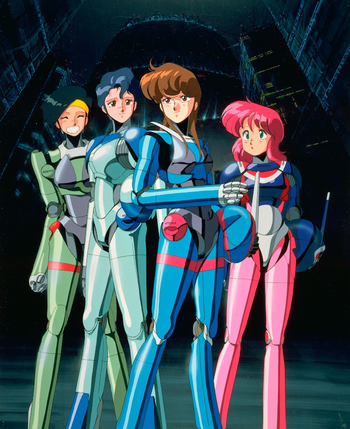 One of the groundbreaking anime series to come out of Japan in the late 1980s and early 1990s, Bubblegum Crisis is a Film Noir/Cyberpunk epic with superhero subtexts (especially Iron Man), heavily influenced by the films Blade Runner, The Terminator, and Streets of Fire.

In the early 2030s, the world economy (and some of its politics) is controlled by the megacorporation GENOM, whose primary product is the boomer — humanoid robots that can be manufactured for any purpose from cheap labor to prostitution to heavy combat. Opposing GENOM and its plots are the Knight Sabers — four women in astoundingly advanced powered combat suits, led by Sylia Stingray, the daughter of the scientist who invented boomer technology and who was murdered by GENOM's agents when they stole it.

The meaning of the title is obscure. Most commentators believe that it refers the point in blowing a bubblegum bubble where it has equal chances of exploding all over your face or collapsing limply. The mid-21st-Century society depicted in the show appears to be approaching a similar crisis point. In what is certainly a coincidence, the OVA production roughly corresponds to the peak (and burst) of Japan's Bubble Economy (1988-1991).

Originally plotted for 13 hour-long episodes, Bubblegum Crisis was forced by a mixture of budget issues and internal politics between the two studios producing the show to cease production with the 8th episode (which wasn't an ending at all). A 3-hour sequel series, Bubblegum Crash!, is believed to be a compressed version of the plot of the remaining five episodes, but is generally considered to be inferior to the original.

In 1990, a prequel series, AD Police Files was released, featuring Cowboy Cop Leon in his early days on the force, five years before the series.

R. Talsorian Games published Bubblegum Crisis Mega Tokyo 2033 The Roleplaying Game using their new Fuzion system in 1996. In addition to the game, the books contained a guide to the episodes and with unused sketches and notes on unused ideas.

It was "reimagined" in 1998 as the TV series Bubblegum Crisis: Tokyo 2040, but the result bears almost no resemblance to the earlier show. It kept the Broad Strokes of the premise and the hardsuit designs, but broadly changed the character designs and personalities, and went off in a different direction from the original series. This version began with Linna as an Office Lady who moved to Tokyo to join her heroes, the mysterious Knight Sabers.

In 1999, a second AD Police series: AD Police: To Serve and Protect, was released. A third OVA focusing on the AD Police, Parasite Dolls, was released in 2003. For a time there was talk of a sequel series, Bubblegum Crisis Tokyo 2041 that ADV Films would have been more involved with in terms of production and story, but it never materialized. This project probably died when ADV went bankrupt and reorganized itself into Section 23 Films.

In 2008, the company AIC announced that they'd signed an agreement to let a Singaporean studio begin production of a live-action version of Bubblegum Crisis — which has ballooned into a coproduction between six countries (including Australia and China), planned for release in 2012. Fan reaction seemed to be skeptical (especially with the reported $30 million budget), yet hopeful — especially with the possibility of another anime revival as a tie-in. However, the complete lack of news in over a decade since its announcement suggests the project entered Development Hell, and has probably since been silently cancelled.

The most recent installment in the franchise is a one-shot 2012 Light Novel, Bubblegum Crisis: Hard Metal Guardians,note or "Carbide/Super Steel Guardian Angels," which reimagines the story High School A.U. style.