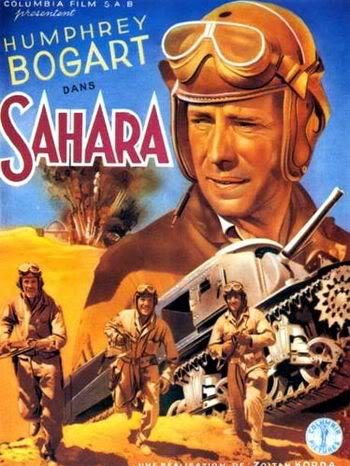 After the Battle of Gazala, Gunn and his remaining crew are separated from their unit during the retreat. Heading south across the desert to rejoin their command, they encounter a bombed-out field hospital, where they pick up Captain Halliday and his own motley band of four Commonwealth soldiers and a Free French corporal. Shortly after that they add the Sudanese Sgt Mjr Tambul and his Italian prisoner Giuseppe, and finally a crashed Luftwaffe pilot named von Schletow.

Desperate for water, they arrive at the well at Bir Acroma, but discover a German battalion, equally desperate, is right behind them, leaving Gunn and his men to either convince the Germans to lay down arms and be on their way in exchange for the water, or defend the well until reinforcements arrive.

Generally regarded, along with films like Thirty Seconds Over Tokyo, Casablanca or In Which We Serve, to be one of the relatively few wartime movies that holds up today outside of its propaganda value. It was a loose adaptation of a 1936 Russian film The Thirteen, itself an adaptation of John Ford's The Lost Patrol, and was remade in 1995 with James Belushi in Bogart's role.