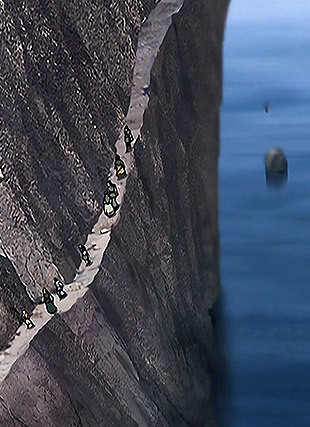 Hats off to the builders.
Thor: [on seeing where Loki is heading the ship] ...Loki?!
Loki: If it were easy, everyone would do it.
Thor: Are you mad?!
Loki: Possibly.
— Thor: The Dark World
Advertisement:

Not many people use a particular route. Why? It's damn difficult, that's why, otherwise most people probably would. But, for some reason, a character needs to use it, probably because the usual route has been destroyed or otherwise blocked off. This is a case of Don't Try This at Home as the success of such a plan is rarely Truth in Television due to the probability of things going wrong. Dangerous Clifftop Road is a subtrope.

Usually (though not always) this route is rather shorter than the main journey, and sometimes (though not necessarily) shorter than the usual route. Sometimes said route is the only route to a place, in which case that place is also rarely travelled to. The route may have a dangerous-sounding name like "the Devil's Backbone" or "Dead Man's Pass".

This trope is more frequently seen in media that tend to have longer stories such as Literature or a series of films rather than things like Live-Action Television (TV series can have long story arcs but the individual stories are usually quite short). The reason being the route can take a long time to travel and is therefore impractical in shorter stories unless Played for Laughs.

This trope often appears as a part of a Walk into Mordor, can be a part of The Homeward Journey, and is sometimes a necessary step in The Quest. However, this trope is not about a whole journey generally being difficult. It is more about a specific route to, or sometimes through, a specific place, which if not for the whole "difficult" thing would probably be rather frequently travelled.

If, in a game, a route is chosen deliberately because the most challenging path seems the most likely to yield good results in the long run, then the route is instead the Path of Most Resistance.

In games this trope can overlap with Railroading (Tabletop Games), and No Sidepaths, No Exploration, No Freedom and But Thou Must! (Video Games).

Compare That One Level. Contrast Took a Shortcut and Shortcuts Make Long Delays.