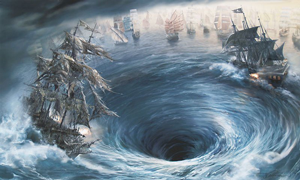 The ships in the vortex go round and round...
"The sea is always hungry."
— Vortex Elemental,

You're sailing through the ocean on a grand ship, and the guy sitting in the crow's nest somehow doesn't see a massive vortex of water that threatens to pull you, your crew, and your ship to the bottom of the sea. Enter the most common version of the Mega Maelstrom.

The poor crew will attempt to sail around the maelstrom, through it or go straight into it if it's actually a Portal Pool.

Occasionally, the Mega Maelstrom may not even be made of water but something vortex-y that might suck in people or things around it. This version can overlap with Swirly Energy Thingy and Gravity Sucks.

In Real Life, aquatic maelstroms exist, and they are dangerous to people swimming in them as well as small boats, but they are merely two currents flowing against each other at high speed which can only cause a small funnel to form, at best. This real maelstrom doesn't actually suck you under; you might go from one fast moving stream to another, in a circle around the epicenter, or you might be eventually thrown off into safer waters.

The Ancient Greek myth of Charybdis makes this trope Older Than Feudalism.

Note that the whirlpool does not have to pose a threat to a large ship to qualify as this trope. It need only be an unrealistically large swirling maelstrom or comparatively large to one of the characters. A bathtub drain could qualify in a movie about anthropomorphic bugs, for example.

If the maelstrom is long-lasting enough, it can overlap with Perpetual Storm.

A massive whirlpool in the Eddy River that sucks the raft in.

A massive whirlpool in the Eddy River that sucks the raft in.