Literature / A Chorus of Dragons 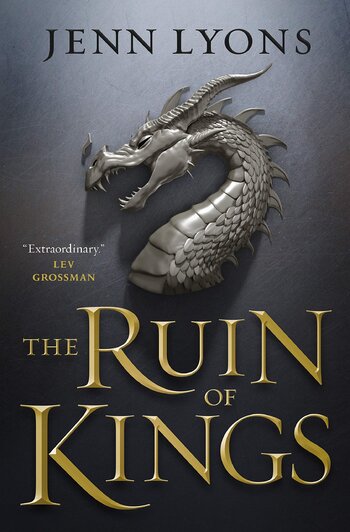 What if you weren't the hero?
Advertisement:

A Chorus of Dragons is a High Fantasy series by Jenn Lyons.

In the heart of the great city of Quur, capital of the empire of the same name, evil is afoot. Kihrin, a young but talented thief, is carrying out what he thinks is a routine burglary when he inadvertently stumbles upon two evil wizards, the victim they're torturing, and the powerful demon they've summoned. Then it turns out one of those wizards may actually be Kihrin's long-lost father — which, incidentally, makes him a member of House D'Mon, one of the most powerful (and corrupt) noble houses in the empire. As it turns out, going from Rags to Royalty isn't as much fun as its made out, especially since your newfound family is rotten to the core and a cesspool of cutthroat intrigue. Of course, the intrigues of House D'Mon are only a very small part of the events unfolding around the world. There are far more powerful forces at play than Kihrin realizes, and some of them are very interested in him, and a small group of other special youths whose paths he will soon cross, indeed. Especially since it turns out Kihrin may be destined to destroy the world...