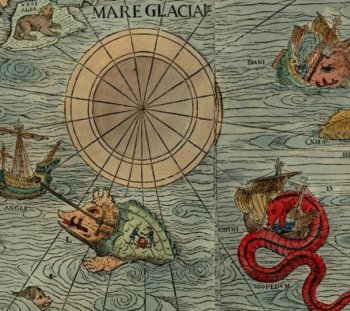 Sea serpents and maelstroms and giant whales, oh my!
Advertisement:

The Carta Marina is a Renaissance-era map of Northern Europe and the North Atlantic, printed in 1539 in Venice. Carta Marina means Sea Map, but this is only an abridged nickname; the full title (Carta Marina et Descriptio Septemtrionalium Terrarum ac Mirabilium Rerum in Eis Contentarum) translates to Sea Map and Description of the Northern Countries and the Marvels Contained in Them. It is frequently reproduced for the sake of its lavish illustrations.

The Carta Marina was created by Olaus Magnus (1490-1557), a learned and widely travelled Catholic Swedish dignitary who moved to Italy after Sweden joined the Protestant Reformation. The original was printed in an extremely limited edition of nine copies, so as to increase its value. Only two of these survive today (located in Munich and Stockholm respectively), although a scaled-down replica was produced in 1572, of which several copies survive. The original map was not colored, and none of the two remaining specimens is.

The size of the original map is 1,25 m x 1,70 m. It consists of nine separate woodcuts, each marked with a capital letter from A to I, and combined in a 3 x 3 grid. There are three different commentaries that go with the map, a Latin one in the bottom left sheet of the map itself, and two separately printed ones in German and Italian respectively. Of these, the Italian commentary is somewhat more exaggerated and fantastic.

The Carta Marina has the merit of being the first fairly correct map of Scandinavia, and for a long time helped to shape the popular image of Scandinavia in the rest of Europe. The most salient feature of the map, however, is the gallery of blood-curdling sea-monsters that populate the map's North Atlantic. Descriptions and pictures of sea-monsters throughout the 16th and 17th century and beyond are frequently based on the Carta Marina.

or as an interactive version

. There is also an interactive version of the 1572 reprint.

See also A Description of the Northern Peoples.