Literature / The Life of Milarepa 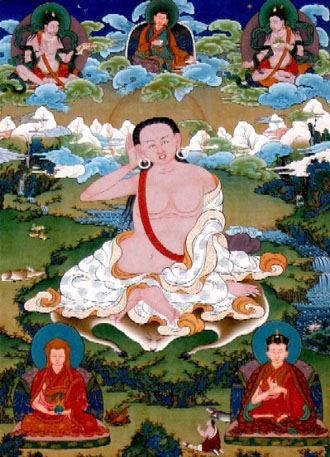 Crouching Yogin, Hidden Badass
"I was filled with remorse for the evil I had done by magic and by hailstorms. My longing for the teaching so obsessed me that I forgot to eat. If I went out, I wanted to stay in. If I stayed in, I wanted to go out. At night sleep escaped me. I dared not confess my sadness to the lama or my longing for liberation. While I remained in the lama's service, I asked myself unceasingly and passionately by what means I might practice the true teaching."
— Milarepa, deciding that learning black magic was a bad idea after all.
Advertisement:

This biography details the struggles of Tibetan folk hero Milarepa as he works toward enlightenment, striving to overcome a crappy childhood and a young adulthood spent killing people with black magic. It reads a little like Harry Potter for the Buddhacharita set, illustrating religious principles against a backdrop of epic conflict and magical pyrotechnics. Its accessibility has made it a major part of the Tibetan Buddhist canon.

Milarepa has the perfect childhood— until his father dies. Then his evil aunt and uncle seize all his family assets, forcing him into a life of hardship and sorrow. Seething, his mother White Jewel encourages him to learn sorcery so he can take his fantastic revenge. Ever the dutiful son, he brings his Tear Jerker of a story to a powerful lama, who takes pity and schools him in The Dark Arts accordingly.

With his new powers, Milarepa returns home and collapses his uncle's house, killing thirty-five people. White Jewel rejoices (a little too gleefully, people say), but the terrified villagers insist his revenge was over-the-top and start plotting to kill him, forcing him to flee. Meanwhile, seized with disgust and remorse, Milarepa discovers religion. He starts hunting for another lama— one who will teach him the dharma, liberating him from the stain of his misdeeds. The yogin Marpa seems an answer to his prayers. But as far as this no-nonsense guru is concerned, nirvana doesn't come cheap.

The Life is told using a complicated framework-tale structure. Milarepa himself regales a crowd of followers, one of whom is the actual narrator, with the events of his youth. He's also known for randomly bursting into song— sometimes in front of people who'd like nothing better than to kill him. They don't call him the Singing Saint for nothing.

The Life of Milarepa contains examples of: