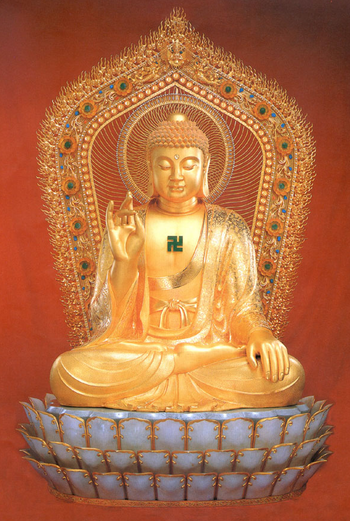 Labelled variously as a religion, a philosophy, or a "way of life," Buddhism is probably one of the world's more confusing religions, philosophies, or "ways of life." A few things to note first:

Life of the Buddha

The story of Buddhism begins with the birth of Siddhartha Gautama in modern-day Nepal around the year 500BCE. As was the fashion of the time, his father, the King of Shakya, took his newborn son to an oracle to have his future read. The oracle told the King that the child would grow up to either be a great king if he experienced no suffering, or a great spiritual teacher if he did. King Suddhodana preferred that his son follow in his own footsteps, and so young Siddhartha was raised with every desire fulfilled but without being allowed to leave his father's palace.

Fast forward 29 years. Siddhartha is now married and in the prime of his life. But he wonders how he can be an effective king if he has never even left the palace to see his kingdom. So his father relents and allows Siddhartha a single day outside the palace. But King Suddhodana secretly sends his ministers to pre-arrange every sight that Siddhartha will see, removing from public view all of the beggars, lepers, and dying subjects.

As Siddhartha walks the street greeted by his subjects, though, he catches sight of an old man. Having been sequestered in a false, perfect world up until this point, he is forced to ask his chariot-driver what is wrong with the elderly individual. He is told that it is an old man, and all men will one day grow old like him. Siddhartha is shocked and continues looking into the crowd in earnest, whereupon he sees a leper. He is shocked by the unhappiness that is visited upon humanity, and embarrassed by his naiveté. The Second sight that he sees is a decaying corpse. This time, he is told by his driver that it is the fate of all human beings to die. At last, he comes upon a third sight — a Hindu ascetic monk. Siddhartha abandons everything to follow this monk, who he hopes will lead him out of the misery that afflicts all humankind, leaving behind his kingdom and a father and wife who are probably somewhat ticked off at the Broken Masquerade.

) were extremely severe, and they ate and drank so little that some of them would even die of starvation. Siddhartha himself almost died of hunger and misery while pursuing the ascetic lifestyle, but one day a peasant girl brought him a bowl of rice to eat and he accepted her generosity. His five ascetic companions were scandalized. Fed up, Siddhartha renounced athe path of the Sramanas, lamenting that not only had he not grown spiritually, but this self-mortification might make him see himself as being superior to others. In his desperation, he planted himself under a banyan tree in Gaya, and refused to budge until he had received enlightenment.

For 49 days, Siddhartha struggled with his ignorance under the tree. Tempted by the demon Mara, assaulted by flies, distracted by all of the drama that comes with being human, he refused to give in to any illusion and continued seeking absolute enlightenment. At age 35, under the Bodhi tree, Siddhartha reached enlightenment and became the "Buddha," a Sanskrit word meaning "One who is awake."

The Buddha had realized that the trouble with being human came from clinging and attachment. Everything that comes into existence goes out of existence — all our friends, lovers, family, video game consoles, health, our lives, and even TV Tropes. The trouble wasn't that these things happen to us, but that we approach life with a flawed set of expectations. One who can accept whatever happens to them without complaint and without craving will never, ever be disappointed. People who find happiness within themselves can be happy no matter what the external circumstances of their lives are, and can eventually achieve the perfection of equanimity, beyond even happiness.

After Siddhartha achieved enlightenment, it is said that he taught the Four Noble Truths in his first sermon. They are, summarized:

These concepts form much of the basis of Buddhism. Temporary things cannot provide permanent happiness, and since all things in existence are temporary, existence itself is fundamentally unsatisfying. Note, however, that while the Four Truths are a key part of Theravada Buddhism, they are not that prominent in the Mahayana schools.

The Three Marks of Existence

There are philosophical traits of existence which we regular humans might not be able to realize, which brings us suffering.

Often split into three parts, The Noble Eightfold Path is one of the other foundations of Buddhism:

Buddhists believe that all phenomena in the physical world are characterised by the Four Seals or Axioms. They are, summarised again:

Two more important concepts key to Buddhism are those of reincarnation and karma. In Buddhist theology, there is no fixed soul, so there is nothing that could actually be reborn. Instead, what we perceive as a person's soul or a person's self is rather a continuous stream of thoughts that continues even after a body has died and will continue in another newly born body. (For a great number of lay Buddhists this is mostly a technicality, though, and not given much thought, if any.) The body which the person is reborn in is determined mostly by karma, although skilled practitioners can control to a certain extent which realm they are reborn in, as can higher beings.

Karma is an action or energy created through action that drives a person's life, death, and rebirth. The concept of karma is like that of cause and effect — Buddhists believe that whatever actions are taken by the individual will have an impact on the individual's future. Buddhism makes special emphasis on the mental intent behind an action — it is possible to accrue positive or negative karma through emotions and thoughts alone. Karma can be both short-term, which arises as the near-immediate consequences of one's actions in the physical world (for example, anger at another person can lead to hate from that person) and long-term (which will decide a person's rebirth and future circumstances).

A person is responsible for his or her own karma, and it is their actions that will ultimately decide their future. Depending on the branch of Buddhism, there can be many ways to purge bad karma, including paying for religious service and performing rituals, but nothing of this makes up for oneself's judgement and virtue.

The exact experience of Nirvana is said to be beyond human description or comprehension, but most schools of Buddhism agree on the basics.

Nirvana literally means "blowing out," as in a candle. It is freedom from the cycle of rebirth and painful existence that affects all beings. In Nirvana, one experiences neither heaven, nor hell, nor any form of existence. It is an existence beyond existence. In this way, all one's cares and anxieties are swept away. One experiences a perfect stillness of mind and eternal peace. This is not a peace in the sense that we know it, as a reprieve from suffering or as a fulfillment of one's desires, but as a freedom from any desire or emotion whatsoever. A commonly used metaphor is of a drop of water falling into a still pool. While the drop was once perceived as separate, and in some sense can still be found in the pool, it is now entirely subsumed into the wholeness of the pool itself. (The extent to which one keeps one's personality varies by school.) In Hinduism, this is called Moksha, and is described as reunion with Brahman — the divine foundation of all things — when one understands that one's true self and Brahman are the same.

Though Moksha and Nirvana are often used interchangeably, they are not exactly the same. While Hinduism tends to stress the oneness of the Self with all things, Buddhism tends to stress the non-existence of Self. How these conceptions of enlightenment are functionally different can, to the layperson, be highly technical, and in fact was one of the reasons Buddhism died out in its native India.

The extent to which reincarnation, karma, and Nirvana are taken literally or viewed as extended metaphor varies wildly. In Asia these are more likely to be accepted parts of Buddhist theology; in the West, they're generally dismissed as illustrative.

Buddhism is an ancient religion, and over time has split into many denominations. These are grouped into three main "vehicles." Theology can vary wildly between them, and sometimes even within them. These descriptions are for general purpose only:

("New Vehicle."), which refers to two largely unrelated traditions that began in the last century or so - the Dalit Buddhist movement

in India, and various forms of Western

. Dalit Buddhism was founded in the mid-20th century, by Untouchables in India. Influenced by rationalism and Marxism, it rejects all supernatural powers and emphasises reason and empirical truth. It also explicitly rejects the idea of rebirth, and inheriting karma from a previous birth. In addition to these theoretical differences, Dalit Buddhism opposes Hinduism, which it sees as responsible for the propagation of the caste system and the Dalit position at the bottom of the social totem pole. While Dalit Buddhists take their teachings from all three schools, they tend to emphasize what they see as the Buddha's role as a political and social reformer, rather than as a spiritual teacher. In this sense, it has much in common with Liberation theology

, a form of Christianity that heavily emphasizes political and social justice for the poor. Modern "reinterpretations" of Buddhism, mostly found in the West, tend to be benign forms of "spirituality" and "self-improvement," often jettisoning much of the cosmological and theological baggage of Buddhism found in Asia, and refocusing attention from Nirvana on to how one can improve one's life here on Earth.

Decline of Buddhism in India

Buddhism is almost entirely dead in the land of its birth, comprising less than 1% of the population of India. Various theories have been proposed for why Buddhism declined over the centuries and gradually disappeared, ranging from persecutions by hostile rulers to degeneration of the monasteries. Even as early as the 5th century, visiting Chinese monks commented on the sorry state of Buddhism in India. Ultimately what did Buddhism in was religious syncretism. Over the centuries Hinduism and Buddhism grew closer and closer in religious practice, such that by the Middle Ages it was hard for a layperson to tell them apart. Hindu mystics took the good parts of Buddhism and incorporated them into their belief system. Eventually Buddhism had nothing of its own left to teach. When Indian sages proclaimed that Buddha was an avatar of Vishnu, that was the end for Buddhism. With many Buddhists already worshipping Hindu gods, there wasn't any point in remaining a Buddhist anymore. In the end, it wasn't so much "destroyed" as simply (re)absorbed into Hinduism.

Countries Where Buddhism is Popular (in decreasing order of believers)