Laos, officially known as Lao People's Democratic Republic (Lao Language: ສາທາລະນະລັດ ປະຊາທິປະໄຕ ປະຊາຊົນລາວ Sathalanalat Paxathipatai Paxaxon), is the only landlocked country in Southeast Asia.note This appears to be its most memorable trait, judging by Trivia quizzes. However, it does have access to the sea since it has the Mekong River which flows through the South China Sea. The country is also fairly hilly and still largely forested, unlike its neighbors. The capital is Vientiane, located on the banks of Mekong and bordering Thailand. It is a Marxist-Leninist state, but like China and Vietnam, had introduced a market economy, albeit less successful than both of them. It has been a member of ASEAN, Southeast Asia's intergovernmental organization, since 1997. Alongside China, Vietnam, Cuba, and North Korea, it is one of the only remaining nations to be technically classifiable as communist.

The Lao language is related to Thai, both part of the Kra-Dai language family. In addition to the Lao, there are also various minor ethnic groups who live in the hillier part of the country. They speak a variety of different languages, some related to Lao, some aren't. One of the latter group, the Hmong, are probably the most famous to Americans, as they have established a significant diaspora in the United States. Thanks to being a former French colony, French used to be an important working language, but its usage has declined in recent years, being replaced by English (the long American intervention helped as well). The country's major religion is Theravada Buddhism.

Like the Thais, the ancestors of the Lao emigrated from somewhere in Southern China in the 1st millennium CE, in the process pushing the indigenous Mon-Khmer into their current locations. The earliest Laotian state in recorded history was Lan Xang, founded by Fa Ngum in the 14th century. This state was much larger than Laos today, extending into the Isan plateau in northeastern Thailand. In the following centuries, the Burmese, the Thais, and the Vietnamese forced their way through Laos, by then split into independent kingdoms like Luang Prabang, all of which later became vassals of Thailand. Chao Anouvong attempted a rebellion against the Thais in 1826, but failed. Because they shared a similar culture with them but lived on a hillier terrain, the Thais saw the Lao as a sort of their rustic cousins; even today, the Isan's titular people, who are descended from ethnic Lao who remained within the borders of Thailand after the French invasion, continue to be stereotyped this way.

In the 19th century, the French expanded through Indochina. The Lao king of Luang Prabang accepted French control to protect himself from the Chinese Black Flag Army in Indochina. It was a source of corvee labor in Indochina. In World War II, Laos was occupied by Imperial Japan and was given nominal independence in 1945. When France returned, the Lao people, like the Cambodians and the Vietnamese, were not in a mood to bow again to France, and by 1953, Laos was declared independent as the Kingdom of Laos.

The independence was not easy. Communists called the Pathet Lao, led by Prince Souphanouvong, rebelled against the royal government. A peace deal was brokered by Prince Souvanna Phouma, also Premier and Souphanouvong's half-brother, in 1962, but to no avail.

As with Cambodia, Laos suffered spillover from the Vietnam War when North Vietnam decided to help the Pathet Lao in 1968. As a result, US forces bombed Laos, too. The amount of bombs dropped there exceeded those dropped in World War II by all sides. As a result, Laos is the most heavily bombed country per capita in the world. When North Vietnam regained the initiative in the 1970s, the Pathet Lao were re-emboldened, and by 1975, overthrew the Lao monarchy and set up the Lao People's Democratic Republic, dependent on North Vietnamese support. The downside was that it caused 200,000 Laotians, many of them ethnic Hmong, to emigrate by boats, some reaching the United States. The war is known as "The Secret War" due to the extensive covert presence of the CIA in it - this is what Hummel's conversation in The Rock is referring to.

Later in the 1990s, the Laotian government eased up its restrictions on the economy, hoping to attract investors. It's been less successful than its neighbours. 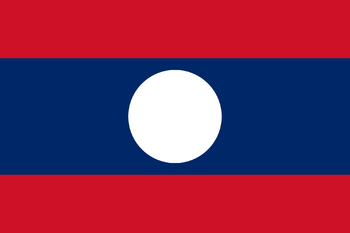 The red bands symbolize the blood of Laos' fallen freedom fighters, and the blue center band for prosperity. At the center is a white disk, symbolizing either national unity under the Lao People's Revolutionary Party, the nation's bright future, or the reflection of the moon on the Mekong River.
Emblem of Laos 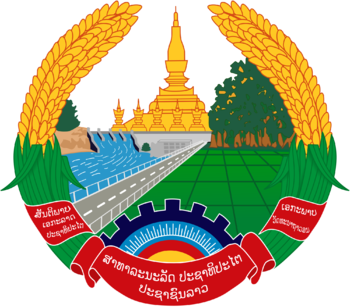 For all time, the Lao people
Have glorified their motherland,
United in heart,
Spirit and vigor as one.
Resolutely moving forwards,
Respecting and increasing the dignity of the Lao people
And proclaiming the right to be their own masters.
The Lao people of all origins are equal
And will no longer allow imperialists
And traitors to harm them.
The entire people will safeguard the independence
And the freedom of the Lao nation.
They are resolved to struggle for victory
In order to lead the nation to prosperity.
Government