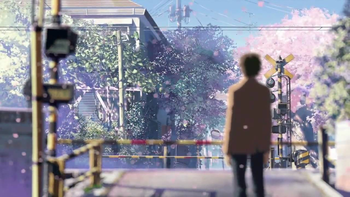 "I probably just want to leave a trace of myself behind in this world."
"Summer grasses—
the only remains
of warriors' dreams."
— Matsuo Bashou
Advertisement:

All things in life are fragile and impermanent. Everything we love is doomed to fade... but at the same time, isn't that what makes it beautiful?

(物の哀れ; often translated as "the ahh-ness of things") is a kind of wistful sadness that would come to be considered the Central Theme of Japanese art, and one of the pillars of Japanese identity. Cherry Blossoms, the national symbol of Japan, are considered to embody this sentiment — blooming for a short time in vibrant colours before falling away. This also extends to the seasons in general, leading to the heavy emphasis of seasonal motifs in Japanese poetry. Because it is so short-lived, Mono no Aware considers childhood to be beautiful, which may go a way to explaining Kawaisa culture and the tendency of Japanese works to portray (non-active) paedophilia as a character flaw rather than an outright villainous trait.

On the Sliding Scale of Idealism Versus Cynicism Mono no Aware tends towards the idealistic, while in the conflict of Romanticism Versus Enlightenment it falls somewhere in the middle, embracing change while mourning the past.

Stories built on Mono no Aware rarely have big, climactic endings, and are more likely to be bittersweet or fizzle out gently.

Compare The Anti-Nihilist, Bathos and Martyrdom Culture. Contrast They Changed It, Now It Sucks!, The Fatalist, Mortality Phobia and Nostalgia Filter. See also UsefulNotes.Buddhism and It Can't Be Helped.

Tropes associated with Mono no Aware