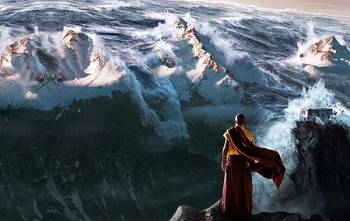 "We can live beside the ocean
Leave the fire behind
Swim out past the breakers
Watch the world die."
— Everclear, "Santa Monica", the Trope Namer
Advertisement:

It's The End of the World as We Know It. Civilization is officially collapsing all around us. In this kind of situation, a person has two options: They can barricade their doors, and protect their homestead, or they can take everyone they care about out of the cities, to a safe vantage point, from which to watch everything crumble into dust. This is about the people who take this second option.

Common from the 50s to the 80s due to the fear of nuclear annihilation. See While Rome Burns, which is about not caring the world is ending, while this is watching it from a safe vantage point. Also compare Face Death with Dignity, which this is on a world scale.

open/close all folders
Anime & Manga
Comic Books
Films — Live-Action
Advertisement:
Literature
Live-Action TV
Music
Tabletop Games
Video Games
Webcomics
Web Original
Web Animation
Western Animation
Yesterday,
I watched worlds nearly die in a thousand thousand fantastic ways. Sometimes we would have had time to type it down.
Today,
I'm alive to write about it. You want original endings? F██ you.
You're alive to proofread it.
God help us all.