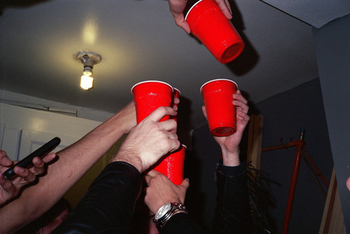 Raise your solo cups to being young!
"Tonight,
We are young!
So let's set the world on fire,
We can burn brighter than the sun!"
— fun.
Advertisement:

A song about how great or sucky it is to be young. It is likely to be sung from one of two perspectives: 1. Someone past their youth reflecting on their youth but putting themselves back in that version of themselves, or 2. Someone still young, singing about it and/or not wanting to grow up. In either case, it may be a Coming-of-Age Story as the time sung about is usually important or symbolic.

Common settings for the song are Everytown, America, the summer that the singer turns eighteen, a last hurrah Road/Field Trip, or saying goodbye to home. And... that's nearly always it, if a time or place is established. Other common features include drugs and alcohol, as well as other questionable activity because they're Young and Stupid.

Whilst unlikely, it is still plausible that the song will be a fond goodbye to youth rather than the more common wanting to go back. It's also unlikely that the adolescence is going to be presented negatively, even if the tempo is slow, a minor key is used, or the lyrics imply hospitalisation - because what got them there will have been having a good time.

In rare cases it may also be an Age-Progression Song if the song doesn't span very long but references youth further back. See also Best Years of Your Life and Glory Days.

Other titles by genre