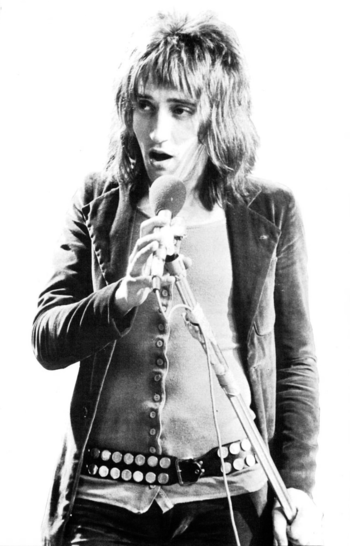 "Rod Stewart was once interviewed saying how he felt it was so wonderful to be married to his newest wife, that he'd 'rather have his dick cut off' than cheat on her. That's a direct quote, by the way. Some time later, Rod 'Spread your wings and let me come inside' Stewart is sued for divorce from his wife on the grounds of adultery."
— The Dominator, The Takeover Man
Advertisement:

Sir Roderick David Stewart CBE (born 10 January 1945) is a British singer-songwriter best known for his raspy voice and a flair for storytelling in his lyrics. He has had a considerably longer and more varied career than many people probably realize. After navigating the London Folk and Blues scenes in The '60s, Stewart fronted the Jeff Beck Group, and was also the lead singer for Faces concurrently with his early solo success.

Beginning with his solo debut in 1969, Stewart's early material mixed Rock with his folk and blues influences, and lyrics that reflected a working-class sensibility. Picture an English Bruce Springsteen years before Springsteen began his career and you have an idea of what Stewart was doing at that point. In 1971 he achieved a Breakthrough Hit with "Maggie May", a song about a teenage boy who is tired of shacking up with his much older lover. After that, his music gradually became more slick and Rock-oriented, and he became famous—or infamous—for sexually-charged songs like "Tonight's the Night", which discusses seduction of a virgin (including an almost explicit description of him demanding she let him get inside her); "Da Ya Think I'm Sexy", a Disco tune about a man and woman who have sex after meeting in a nightclub; and "Young Turks", about a boy and girl who decide to run off together when their parents won't let them be together any more (probably because he got her pregnant). By The '80s he had softened his style into lighter soft rock and ballads, and shortly after the Turn of the Millennium he successfully reinvented himself as a crooner of traditional pop standards on a series of Great American Songbook albums.

He might also be famous for his numerous girlfriends and wives (and sometimes both together), including Britt Ekland, Alana Hamilton, Rachel Hunter, Penny Lancaster and others. He has one daughter from one of his wives.

He tried to be a footballer (soccer player for you Americans) and typically tosses a soccer ball out into the audience for them to bounce around. He's also known for having very rowdy hair, and he's a model train enthusiast.