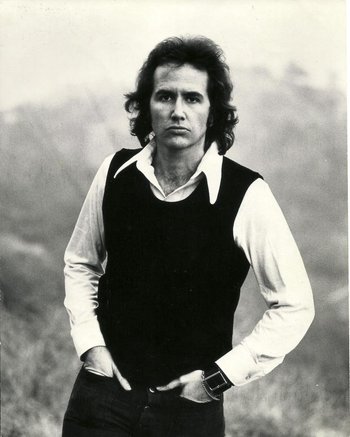 "There's California bloodlines in my heart, and a California heartbeat in my soul"
Advertisement:

John Coburn Stewart (September 5, 1939—January 19, 2008) was a California-based Folk Music Singer-Songwriter from San Diego. Mainly remembered by the general public as a One-Hit Wonder (1979's "Gold"), he had a long, prolific career that included several albums that are considered Cult Classics.

After playing in a few early Southern California Garage Bands in The '50s, Stewart formed the folk trio The Cumberland Three (one of the other members was Gil Robbins, father of Tim Robbins), hoping to match the success of The Kingston Trio. Instead, he ended up joining The Kingston Trio itself in 1961, replacing Dave Guard.

With a rich, gravelly baritone that often drew comparisons to Johnny Cash, Stewart quickly carved a niche in the band as a multi-instrumentalist, singer (mainly handling the group's more serious songs) and especially as a songwriter.

The trio played their last show in 1967. Stewart, who'd been polishing his songwriting skills, took the opportunity to establish himself as a solo artist. He got a big break when The Monkees recorded his song "Daydream Believer" and took it to #1. This gave Stewart notice as a songwriter and a huge windfall in royalty money that allowed to him to focus on Doing It for the Art with his music.

His first post-Kingston album was 1968's Signals Through the Glass, done as a duet with female singer Buffy Ford (who became his partner and eventually his wife). The next year saw his formal debut album, California Bloodlines, which established the style that formed the basis for the rest of his career: acoustic-based songs that examined themes of Americana, love, childhood, the road and the lives of common people, with a unique lyrical style that was poetic but also spare and uncluttered.

For most of The '70s, Stewart released one acclaimed album after another, but couldn't get any of his critical accolades or his enthusiastic cult to translate into strong sales. After signing with RSO Records (home of The Bee Gees and Eric Clapton), Stewart got assistance from an unlikely source: Fleetwood Mac's Lindsey Buckingham, who'd been a Kingston Trio fan growing up and wanted to help his old idol. The Stewart/Buckingham collaboration yielded Bombs Away Dream Babies, which soared to #10 on the Billboard album chart, on the strength of the Top 5 single "Gold", which very conspicuously featured a Mac-style sound and Stevie Nicks on backing vocals. The album produced a couple other hits ("Midnight Wind", "Lost Her in the Sun"), but his future efforts in a similar vein weren't successful. He pressed on, however, starting his own record label (Homecoming) and releasing numerous albums up until his death.

Not only was his voice often compared to Johnny Cash, he sang lead on the original 1963 Kingston Trio version of "Jackson", and his song "Runaway Train" became a #1 hit on the Country Music charts for Johnny's daughter Rosanne in 1988.

His younger brother Michael Stewart also had a music career, as a member of the band We Five, and later as a producer (most famously Billy Joel's Piano Man album).

Not to be confused with Jon Stewart or the Green Lantern character.

"There's people out there turnin' Tropes into gold"