Attune your ears... to the grinding gears. 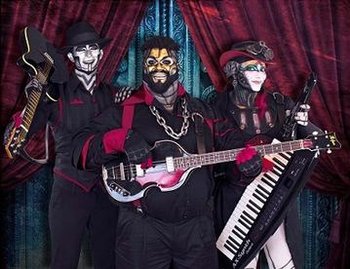 According to the band's fictional backstory, the "musical automatons" were invented by a rich San Diego inventor named Colonel P. A. Walter in 1896 and kept in the Walter family over the years. Called the 8th 1/2 Wonder of the World, the robots were a technological marvel that ran off steam powered engines and artificial intelligence. The band's name is said to come from Walter's first robot, a giant mechanical giraffe. A fictional timeline on the band's website chronicles the band's supposed "appearances" throughout the years at such notable places as the 1933 Chicago World's Fair and The Ed Sullivan Show.

Besides their musical endeavors, the band publishes a Web Comic and has produced a card game based on characters in their backstory.

The Walter Workers - Currently played by two delightful ladies in labcoat dresses that not only manage the bands' online merchandise, but also enhance the bands' shows as dancers. Their characters are "Blue Matter Engineers", but are still fairly mysterious, with more and more hints being dropped about them.

Human Back-ups - Sometimes things don't go as planned and someone can't make it to the gig. Back when the band consisted of more than just the robots, these were the people SPG routinely called on to help them out:

The Brain: Pinky, Are You Pondering What I'm Pondering?
Pinky: I think so, Brain, but what does a steam-powered giraffe even eat?