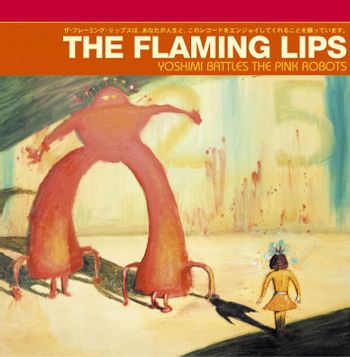 "I don't know where the sunbeams end, and the starlights begin / It's all a mystery"
"The test begins...
...NOW!!!!"
Advertisement:

Yoshimi Battles the Pink Robots (2002) is the tenth studio album by The Flaming Lips. It was the follow-up to the widely acclaimed The Soft Bulletin, and went on to have even greater success than its precedessor.

Whilst not officially a Concept Album (the album title and artwork might beg to differ), many of the songs on Yoshimi are united by a core range of subjects, including fighting for the things you believe in (as well as the reluctance to fight), the Power of Love triumphing over evil, and learning to embrace a world where death is inevitable.

The album spawned the hit single "Do You Realize??", which was selected as the Official State Rock Song for Oklahoma - the band's homestate - in 2009, and has become something of a signature anthem for the group. In 2012 the album was adapted into a Broadway musical, co-written by frontman Wayne Coyne and directed by Des Mcanuff, with Kimiko Glenn as the title character.

Ego Troping at the Gates of Hell: