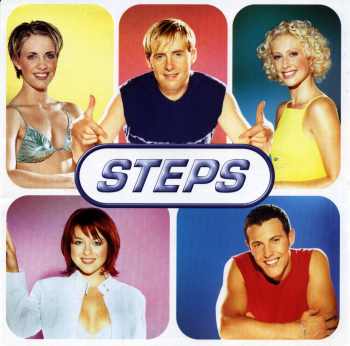 One of THE bands of The '90s (at least if you were British), Steps was a multi-chart topping pop band that lasted from 1997 - 2001, then reunited in 2011. The line-up from start to finish was Lisa Scott-Lee, Lee Latchford-Evans, Claire Richards, Faye Tozer and Ian Watkins. Watkins was known as "H", which stands for "hyperactive".

While their songs were good (and catchy as hell), their main draw was, as their name implies, that each single had a unique, simple dance to go with it. These dance steps were included with most of their single releases which meant their fans could easily learn the dance.

Their biggest hit was Tragedy - a cover of the Bee Gees song, and the success of Steps' version means that Tragedy is largely Covered Up in Britain. They also often considered as the British version of ABBA for the 90s, as some of their songs have palpable influences from the Swedish group.

The band, their videos and their songs contains examples of: