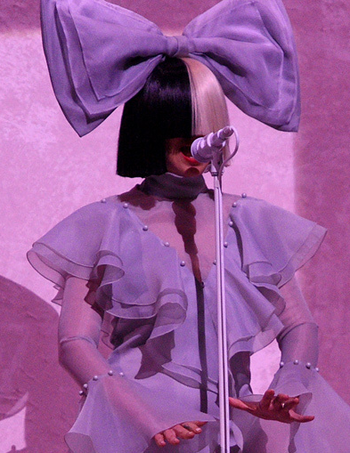 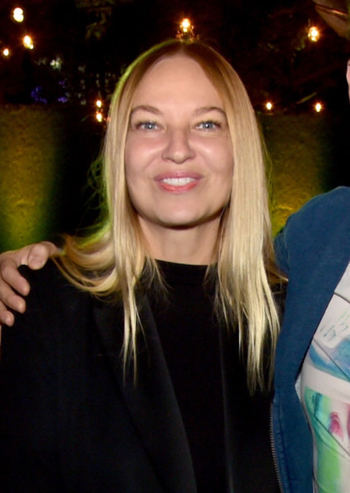 Sia Kate Isobelle Furler (born December 18, 1975) is an Australian Singer-Songwriter, professionally known simply as Sia, primarily known for the dramatic ballads she writes and performs and her signature face-concealing wigs she wears for most public appearances.

She got her start in the mid-1990s singing in an acid jazz band called Crisp, up until they disbanded in 1997. By then, she was branching out into a solo career (having already released an album), singing onto Dance Pool and then Go! Beat and releasing an album with each, as well as being a featured vocalist on several Zero 7 songs, including their hit "Destiny." Eventually, she moved to New York to tour in the States, releasing a fourth album. Sia became more well-known after We Are Born, and her following album, 1000 Forms of Fear and its leading single "Chandelier" pushed her to mainstream success. She further became more famous after collaborations with other high-profile musicians.

From the beginning Sia was always uncomfortable with public attention, and would often distort her image on press shots and at live shows. After her newfound success with 1000 Forms of Fear, she decided to stop showing her face in public shows, and does every live performance either with her back to the audience or covering her face with a now iconic bob-styled wig. She does this as an effort to protect her privacy and after feeling destabilized from fame. Oh, and also because of an admitted extra sense of mysteriousness. In 2018, Sia formed the supergroup LSD with Diplo and Labrinth, and their debut album released in 2019.

In 2015, Sia announced that she would be directing a movie, titled Music. The movie stars Kate Hudson as Zu, a drug dealer fresh out of rehab, who is tasked with taking care of her non-verbal autistic half-sister Music, played by Sia's protégé Maddie Ziegler. Music came out in the early months of 2021 and despite controversy (mainly regarding its portrayal of autism) and overall poor reviews, the movie managed to get nominated for two major Golden Globes: the first was for Best Picture - Musical or Comedy, and the other was a Best Actress – Motion Picture Comedy or Musical for Kate Hudson.

She is the cousin of Peter Furler, former front man of Australian Christian Rock band Newsboys.

This is troping about Sia: