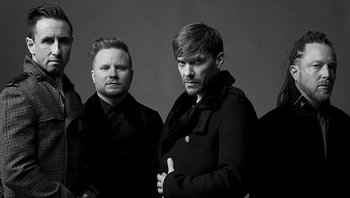 Shinedown is a hard rock band originally from Jacksonville, Florida. Founded in 2001, they first made their impact with an acoustic cover of "Simple Man", and ballooned in popularity from there, peaking in 2009 with the massively popular hit single “Second Chance” off their Sound of Madness album. They have released six albums, the most recent being in 2018.

They contributed songs to the soundtracks of The Expendables, Alice in Wonderland (2010), and The Avengers.

This band's music provide examples of: