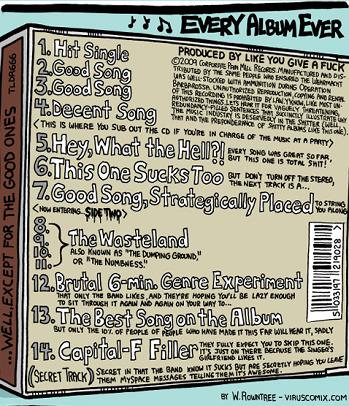 ...wait, why is there a side two on a CD? Answer That's to make it applicable to an LP — a what? Oh, you mean a vinyl!
Advertisement:

As most people know, the music industry has two forms of release in stores. There is the standard two song single and the "full-length" album. However, with most artists, the unfortunate reality is that they usually just aren't creative enough to produce a large number of good songs. This especially gets compounded once they officially make it big, having used up years worth of songs tried and tested with audiences and are usually expected to produce a second album within a year while touring heavily to cash in on their new found fame. So what does one do? Produce Album Filler.

Album Filler are songs that take a perfunctory, Strictly Formula stance on creation in order to have something distinct to fill in some time. They're usually straightforward, unimaginative, and otherwise forgettable. Of course, it isn't set in stone that a song will suck for being filler. Just as how some of the most beloved episodes of many a TV show are quite intentional filler, some of the most popular songs were explicitly created as filler. A famous example of a filler track gaining large prominence is "You've Got Another Thing Comin'" by Judas Priest. This is one of the causes of a Black Sheep Hit.

As a policy for the music industry, this is a bit of a Cyclic Trope as times change and is not entirely consistent across the board. In The '50s, the single was the primary sales unit and albums were just hit singles thrown together with whatever other crap they didn't have confidence in. It was actually pretty uncommon for artists to enter the studio with the intent of recording an album. Most albums from popular artists of this time were more like Greatest Hits sets. For example, Chuck Berry recorded and released his first hit song ("Maybellene") in 1955, but it wouldn't show up on an album until 1959.

This trend continued in The '60s; one notorious example is The Beach Boys being forced by Capitol Records to record several albums in a short amount of time, causing them to have to pad out their albums with filler.* (The worst example might be the Little Deuce Coupe LP, which was released one month after the Surfer Girl LP and included four previously-released tracks) The hit-factory label Motown took it even further, re-recording hit singles for an album with a new singer and never releasing the new version as a single. So you could get all the versions of the hit song you wanted, if you didn't mind paying album price for a single with junk added.

When groups like The Beatles came about and revolutionized the industry with records like Sgt. Pepper's Lonely Hearts Club Band, which began a trend of bands putting out albums that made a unified musical statement, this policy took a bit of a backseat (although most bands still had to produce at least some filler to keep up with contractual demands). The Concept Album started to become popular and rock music was mostly "album-oriented" throughout The '70s (some bands, like Led Zeppelin and Pink Floyd, even did their best to avoid releasing any singles at all). It seems to be coming back in some sectors. Bands that release an album every one to two years are particularly guilty of this— it's almost unavoidable when they crank out hit singles to engage in pervasive airplay.

A side-effect of this was the tendency of bands with long songs, such as Black Sabbath and King Crimson, to add "subtitles" for different sections of the songs, in order to make it seem like there were more songs and they would be paid full royalties (this happened to The Mars Volta too, who were told that for the original version of Amputechture they'd only be paid for an EP despite its length, so they were forced to add "subsections" and split songs apart to get full royalties).

However, album filler was still unavoidable, and every now and then there'd be one or two clunkers thrown in to keep the album at a certain minimum length. Double albums were especially prone to this, due to the sheer amount of work required for two LPs of material resulting in many of these four-sided projects being littered with filler in order to justify releasing it on two discs. Album filler also became an increasing problem when the CD overtook the LP as the dominant physical medium for popular music; because a CD can store 22-28 more minutes of audio than a 12" LP, artists and record companies began to feel as if they were obligated to use as much of this extra space as possible, especially in the US, where the concurrent decline of physical singles in favor of radio and MTV airplay forced artists to rely more on album royalties (which are paid per song). Thus, many albums released between 1987 and 2007 would feature well over an hour of music, typically divided among at least 12 different tracks, a good number of which inevitably tended to be filler.

The 21st century acted as a double-edged sword in regards to this trope. On one hand, the advancement of digital sales (e.g. iTunes) and especially the revival of the LP as the premier physical format motivated a number of artists (especially indie musicians and legacy acts) to shift back towards LP-length albums with carefully curated tracklists. On the other hand, the even lower royalty rates of ubiquitous streaming services like Spotify motivated many other artists (especially those whose primary audiences fell outside the comparatively niche Vinyl Revival's scope) to make long albums stuffed with as many songs as possible to maximize profit on these platforms.

Due to its status as a Omnipresent Trope and the subjective nature of what does or doesn't constitute "filler", there shall be no straight examples. Even listing so-called "aversions" would take up too many pages and be way too subjective. Though we will try to give a summarization of what usually qualifies as "album filler":