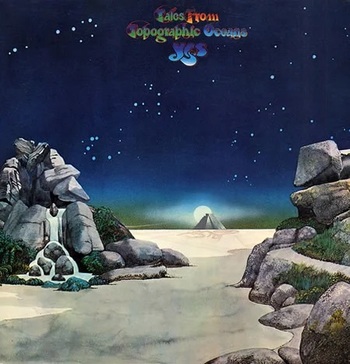 "Nous sommes du soleil"
"What happened to wonders we once knew so well?
Signed promise for moments caught within the spell
I must have waited all my life for this moment."
—"The Revealing Science of God"
Advertisement:

Tales from Topographic Oceans is the sixth album by British Progressive Rock band Yes, released on 7 December 1973 through Atlantic Records. It was also the first studio album to feature former Plastic Ono Band drummer Alan White, who replaced Bill Bruford on the drums after the latter left for King Crimson after recording Close to the Edge. While on the Japanese leg of the Close to the Edge tour, Jon Anderson was inspired to create a next album based upon Paramahansa Yogananda's Autobiography of a Yogi, and pitched the ideas to Steve Howe while in Australia and the US. At the conclusion of the tour, the band reconvened in London to record a double-album with four side long tracks. When the album finally saw release, it became certified Gold on preorders alone in the UK, and was similarly commercially successful in the United States, but Rick Wakeman had famously expressed his dissatisfaction with the creation of the album multiple timesnote for instance, he spent a good deal of the recording time playing darts, headed to Black Sabbath's studio next door to record the keyboard lines for Sabbath Bloody Sabbath's "Sabbra Cadabra", and ordered and ate a curry on stage while in a Manchester concert before departing the band at the conclusion of the album's tour.

The strength of the troping lies with you: