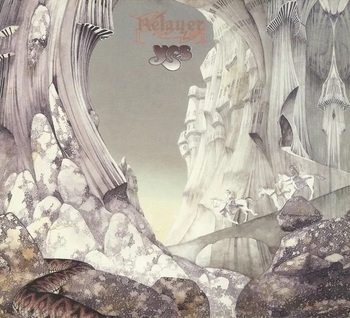 Listen, should we fight forever? Knowing as we do know, fear destroys.
"Soon, oh soon the light
Pass within and soothe this endless night
And wait here for you
Our reason to be here"
—"The Gates of Delirium"
Advertisement:

Relayer is the seventh album by English Progressive Rock band Yes, released on 28 November 1974 through Atlantic Records. After the departure of Rick Wakeman following creative disagreements regarding Tales from Topographic Oceans, Yes convened in Chris Squire's Surrey home to start rehearsals and audition for a new keyboardist. After going through eight candidates (including Vangelis, who Jon Anderson was a big fan of), they found their replacement in Patrick Moraz, a member of the Swiss Jazz Fusion group Refugee. It sold well, being certified gold by the RIAA the following month. Moraz departed from the band upon the return of Wakeman for Going for the One, and he would join The Moody Blues as a touring musician before being formally incorporated in the band by 1981.

Supported by the single "Soon", the third segment of "The Gates of Delirium".

We go sailing down the calming tropes: