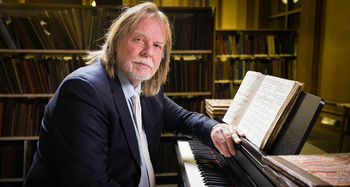 "My life revolves around music and always will. I need to be a part of music and not an observer."
Advertisement:

Richard Christopher Wakeman CBE (b. 1949), universally known as Rick, is an English Progressive Rock keyboardist best known for his work with Yes, which established him as one of the leading keyboardists in Prog Rock at the genre's zenith in the early 1970s. Classically trained at the Royal College of Music, Wakeman found himself in such high demand as a session player that he dropped out of the College in 1969 to concentrate on his career; he played on a dizzying array of records, probably most notably David Bowie's Space Oddity, Hunky Dory, and The Rise and Fall of Ziggy Stardust and the Spiders from Mars. He achieved some success as a member of Strawbs, but his work as Yes' keyboardist during their classic period truly made his name in the music industry. Wakeman would leave and rejoin Yes five times over the coming decades, but remains the keyboardist to whom all other Yes keyboardists are compared.

Wakeman has also amassed a huge catalog of solo works over the years; while his output in the 1980s and later is considered to be relatively weak, his 1970s work stands as some of the defining music of the progressive rock movement.