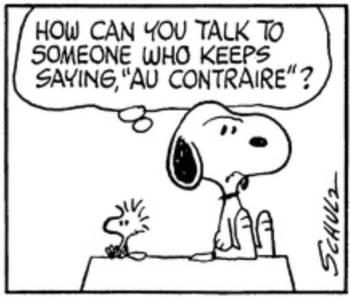 From time to time, characters who want to be seen as très intelligentsnote "very intelligent" add un peu de françaisnote  "a little bit of French" to their speech, n'est-ce pas?note "you know?" or, more literally, "Isn't it?"

This may be because of a certain... je ne sais quoi,note "indescribable quality". Literally "I don't know what" or because French is just—Quel est le mot juste?note "What is the right word?"—cool. And don't forget that French used to be the lingua francanote "common language"; this one is actually Latin of the Western world, and still is a lingua franca in Africanote Particularly in the countries formerly colonized by the French and Belgians such as Morocco, Algeria, Mauritania, Mali, Niger, Senegal, Guinea, Burkina Faso, Cote d'Ivoire, Benin, Togo, Cameroon, Equitorial Guinea, Gabon, Chad, the Central African Republic, Congo-Brazzaville, Congo-Kinshasa, Rwanda, Burundi, Djibouti, and Madagascar ; educated people would learn it to talk to other educated people, possibly about how uneducated everyone who didn't speak French was. Now that English has become the new universal language, the trope is often used to underscore the kind of pretentious bohemian character who lives in a world of their own and has no idea how reality works.

However, native French-speakers usually use English words for the same reason.

Note that this trope's raison d'êtrenote "reason for existence" is for people to appear sophisticated. Pepé Le Pew wouldn't fit here, as he's just a Faux French who thinks that Everything Sounds Sexier in French.

The linguistics blog Notes From A Linguistic Mystic has a name for this—Unnecessary French Syndrome.

Check Trope Names from the French and the Dictionnaire Provisoire for les schémas de noms francophones.note "Naming Conventions for French-Speakers"

The Crusaders meets Polnareff and are displeased by his accent.

Example of:
Not Even Bothering with the Accent

The Crusaders meets Polnareff and are displeased by his accent.