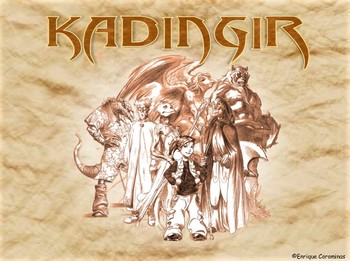 The whole gang
Nakki: Well, Ishtar, we owe you an explanation. There is a lot to say, and very little time to...
Ishtar: Yeah, yeah, Nakki... Way ahead of you. Everything went wrong and now it’s all a huge mess. There’s this parallel universe and the whatchamacallit thingies open portals to come and go. Oh, and some scary tiger guys kidnapped Granny and I’m to inherit her kingdom or something. No biggie. Now, what I really want to know is... How do we get Granny back?
— Kadingir. The Scepter of Zink
Advertisement:

Kadingir is a series of fantasy novels written from 2006 onwards by Spanish authors Joan Llongueras, Merce Masnou and Helena Sales.

The story follows the adventures of Ishtar, a spunky and upbeat girl with a sharp tongue, after she accidentally travels to Ki, a chestnut-shaped world in a parallel dimension full of Fantastic Sapient Species with special abilities. She quickly recovers from the initial shock when she learns that her mysterious grandmother, an Adventurer Archaeologist who she has been penpals with for years but has never actually met, actually comes from this world... And has just been kidnapped! Ishtar's main goal will be finding her, as well as mastering her new-found powers with the help of her Mentor Nakki. That is, if the lizard-king Usúmgal doesn't kill her first.

The series is still ongoing, and currently consists of four books (El Cetro de Zink, El Señor de Zapp, El Caso Shapla and El Cuarto Poder English The Scepter of Zink, The Lord of Zapp, The Shapla Case and The Fourth Power), which follow Ishtar's multiple adventures in Ki. Additionally, in 2017 a prequel was published, La Reina de Kígal English The Queen of Kígal, which was centered on Ishtar's grandmother Nírgal and some other characters in their youth.

The authors have manifested time and again their admiration for the Discworld series, from which they draw some inspiration.