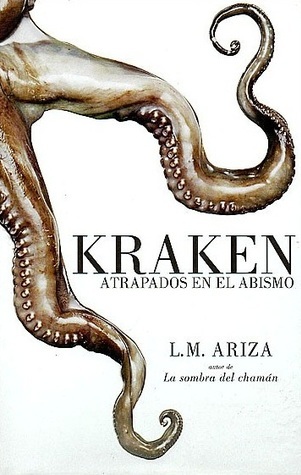 The truth is down there.
Kraken: Atrapados en el abismo is a 2005 thriller novel by Spanish author Luis Miguel Ariza. It was his second work after La Sombra del Chamán.
Advertisement:

NASA microbiologist and troubled single mother Nora Pulaski is about to fulfill her dream: to be part of the scientific staff of the Mars Eternity, a probe being sent to Mars to pierce through its surface. However, weeks before the launch of the ship, she is suddenly removed from the project with no explanation. Pulaski finds out this decision is related to her disappeared uncle, legendary Mars expert Robert Pulaski, who also left the NASA in shady circumstances.

At the same time, Spanish sea ecologist Juan Cepesma struggles in a legal battle against petrol corporation Texon, whose sinister chairman Calvin Steiffel is bent on performing tests on the Cantabrian Sea. Cepesma is then approached by eccentric American scientist Alastair Golombek, who must find proofs of the existence of a giant squid species greater than the famous Architeuthis.

Soon, the two stories tangle with each other, and Pulaski, Cepesma and their allies will find themselves working under pressure... very literally speaking.

Not to be confused with the 2010 novel Kraken.