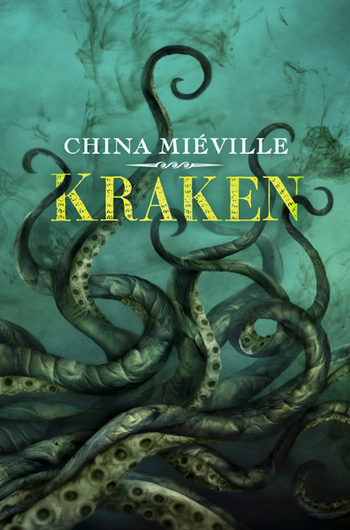 Kraken is a 2010 novel arising from the twisted brainpan of China Miéville, author of Perdido Street Station and its sequels. It tells the story of Billy Harrow, a curator for the Natural History Museum whose work touring guests around one day is rudely interrupted by the inexplicable disappearance of the museum's preserved giant squid. From there, Billy's day only gets worse as he is drawn into a shadowy London underworld of competing doomsday cults, living tattoos, socialist familiars, and Chaos Nazis.

Oh, and the squid? Turns out that half the city is thinking of using it to end the world. Too bad they can't agree on how...

Not to be confused with the 2005 novel Kraken: Atrapados en el abismo, which was released in some countries as simply Kraken.