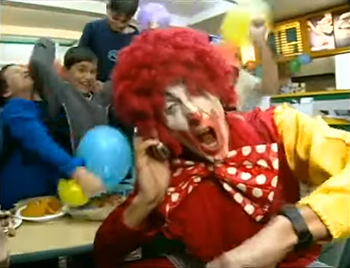 "Yeah it's Ronnie McDoggle here, mate. Where's my Small Hawaiian? I've been waiting for over an hour! WHERE IS IT?!?!?!?!"
Mr. Plotz: Hey, where do you think you're going, clown? I paid you to do an hour show!
Clown: But the puppy boy! He hurts with the mallet and the balloon - boom!
Mr. Plotz: Get back to that water tower!
Clown: Oh, please no, I'm not a well clown!
— Animaniacs, "Clown and Out"
Advertisement:

Kids' parties, especially birthday parties, are tons of fun for everyone attending. But when parties are your job, they can be decidedly more stressful. When it comes to kids' parties, the entertainers are perhaps the people who suffer the most. The kids can be jerks, the adults can be jerks too (especially the Obnoxious Entitled Housewife), you're expected to stay in-character (and unless you're a freelancer, the rules for your character are often strict), it doesn't pay too well, it's not exactly a "glamorous" job... it seems as if every single factor of the job is conspiring to make each performer miserable. That's what this trope is about.

Clowns tend to get the most abuse. Most people are afraid of them, and their facepaint usually makes them seem less than human, making them easy Acceptable Professional Targets. Birthday parties may also be seen as a bottom-of-the-barrel job for clowns, while clowns who perform at circuses or on TV get a little more respect. However, any kind of kids' party performer can fit in this trope, including mascot performers (which can be just as scary to kids as clowns are), jugglers, Stage Magicians, etc.

Sometimes, instead of people being jerks, the stress comes from the kids being afraid of the performer, especially if the performer is a clown or mascot character. The performer will often try to console the kids, but fail due to having to stay in-character.

As a result of all this stress, people who work as birthday clowns or other kids' party performers full-time will often be anxious, depressed, or ill-tempered, though they have to hide it when they're performing. Despite that, this trope is often Played for Laughs, as a form of Comedic Sociopathy.

"Okay kids, it's been great performing for you. Tropo the Clown needs to take a rest now... for a while. Where's the booze?"

Ronnie McDoggle is a parody of Ronald McDonald. This is the early version of the clown before the movie was released. He ordered his Small Hawaiian Pizzas which he had waited for over an hour.

Ronnie McDoggle is a parody of Ronald McDonald. This is the early version of the clown before the movie was released. He ordered his Small Hawaiian Pizzas which he had waited for over an hour.